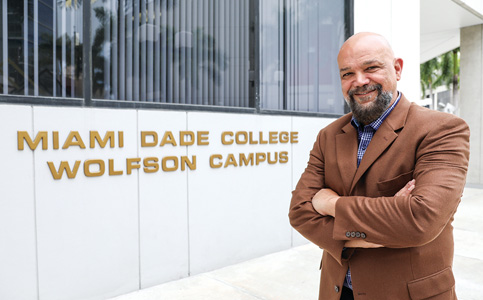 It wasn’t that Al Salas didn’t have options after high school, but few related to college.

“I barely graduated from high school,” he said. “I was a bit of a knucklehead.”

That isn’t to say he lacked industriousness. As a teenager, he learned the ins and outs of the food service industry while working under the tutelage of Burger King co-founder Jim McLamore, and by age 18 he’d become the youngest multi-restaurant manager in company history.

Still, he counts among his life’s most pivotal moments the day he met former Miami Dade College (MDC) president Eduardo Padrón, then a professor at the college, who convinced him to take another shot at scholastics.

“Coming to Miami Dade Community College changed my life,” said Mr. Salas, the chairman of the MDC Foundation, the college’s fundraising arm. “That’s why I’m devoted to this school.”

Combining his business inclinations with insights and lessons he gained through additional formal learning, Mr. Salas’ accomplishments grew. By 1990, after working as a CPA and second stint at Burger King, this time as the company’s finance manager, PepsiCo recruited him to run the finances for its Pizza Hut brand.

In about half a decade, he was overseeing some 700 Pizza Hut and PepsiCo-owned restaurants across Florida.

In 1998, he took the biggest chance of his life, he said, putting together a team of investors and buying the Pizza Hut operations and rights in all of Miami-Dade, Broward and Monroe counties.

At the time, his business was the biggest Hispanic-owned Pizza Hut franchise in the nation. Today, it’s among a few to vie for that distinction.

“I knew I’d done this for the company for many years. Why couldn’t I do it for myself?” he said. “So, I chose to let go of an amazing, huge job at a young age and take a leap of faith into this business I truly believed in.”

Throughout it all, he kept in contact with his alma mater, and about five years ago he joined the foundation. He then became its vice chair. Last year, he took over its chairmanship.

The foundation’s central goal, he said, is to aid students in pursuing their aspirations, regardless of background or finance, through scholarships, workforce training and other vital assistance.

On Sept. 6, in conjunction with the college’s 60th anniversary, the foundation helped to raise a record $2.7 million on “I Am MDC Day,” an especially noteworthy benchmark considering pandemic-related difficulties.

While things have indeed changed, he said, his passion for MDC has not.

“I believe in the school and what they’ve always done,” he said. “This isn’t about Al Salas. It’s about helping students achieve their dreams.”