Advertisement
The Newspaper for the Future of Miami
Connect with us:
Front Page » Real Estate » Spring Garden house plan praised for saving 83 trees 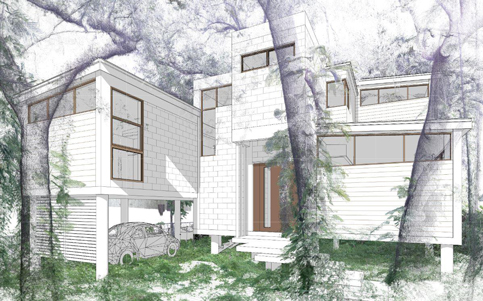 Miami’s historic preservation board has approved of a new house in the Spring Garden Historic District, praising the owner for designing the home in a way that will save every single tree on the site – a total of 83.

Property owner and architect Francisco Perez-Azua detailed his plan to build a new home on his vacant parcel at 975 NW 10th Ave., within the historic district north of the Miami River.

The Historic and Environmental Preservation Board unanimously approved a special certificate of appropriateness to permit new construction and site improvements for a single-family residence at that property.

In his letter of intent to the city, Mr. Perez-Azua said the property is a 5,000-square-foot parcel, currently vacant and densely vegetated with oak trees and palm trees.

He is proposing to build a 1,954-square-foot, two-story home consisting of three bedrooms, 2.5 bathrooms and a carport.

“The home’s footprint is delineated by the existing vegetation as well as the building setbacks,” wrote Mr. Perez-Azua.

“The applicant intends to maintain each and every single tree currently existing on site. To achieve this, and to ensure minimal impact on the existing trees’ root system, the structure is to be raised above the ground by a pier foundation system. Elevating the home from the ground also places the living spaces above the required flood criteria,” he wrote.

“These materials were selected to evoke the historical past but also to address today’s environmental and sustainability concerns.

“We are excited to contribute to the historic character of the Spring Garden Historic District by building a home that will respect the existing vegetation and will endure the test of time and the environmental challenges of the Florida climate,” Mr. Perez-Azua wrote.

During the meeting, Mr. Perez-Azua explained that the property is home to 83 trees, including nine oaks and 72 palms. He said a couple of the palms will be relocated on the site but every tree will be preserved.

Board member Christopher Cawley thanked the applicant for a detailed presentation and said he did an amazing job designing the new residence.

Board member Hugh Ryan acknowledged that Mr. Perez-Azua is respecting the trees and “building around the trees … (while) others have come in and planned to mow down the trees.”

Mr. Ryan also noted the applicant’s plans to use materials that will withstand the test of time and handle the punishing weather in South Florida.

“That tells me that you care a little bit more,” he said.

Board member Najeeb Campbell said: “I second Hugh’s comments. The board had concerns with other proposals in Spring Garden. Mr. Perez-Azua, your proposal gives us some relief over what we’ve felt. It is very modern design but very tasteful … in how (you) respect the trees (and) broken the volumes into elements and zones … I like it.”

Mr. Ryan added that the design reminds him of something from Coconut Grove in the ’70s or early ’80s.

During public comment, a Spring Garden resident was critical of the proposed structure, saying it is oversized and out of scale, and that a single-story cottage, artfully designed, would be more appealing on the site.

The city’s tree ordinance is the responsibility of Quatisha Oguntoyinbo-Rashad, chief of Environmental Resources.

“This design brings a smile to my heart,” she told the board.

“It’s enlightening to see lots of forward thinking, lots of intentional thoughts to preserve our natural resources. So, looking at the design and the concept, I don’t see any concerns.

“With the elevations I see an effort to minimize or possibly eliminate any damage to the root system. There was a great intentional design around them. I believe we’re preserving all of them, correct,” she asked the applicant.

Yes, responded Mr. Perez-Azua, in regard to the trees.

“Fantastic. It really speaks to the fact that … sound development can take place and it can coexist with our natural resources at the same time, so job well done,” said Ms. Oguntoyinbo-Rashad.

A board member asked Mr. Perez-Azua if the new home would be his personal residence.

He said yes. “My wife is an architect too. We’ve both been working on it,” he said.

The conditions include: Fencing is to be redesigned to follow the Historic Design Guidelines and shall be in keeping with the character of the Spring Garden Historic District, and the applicant must make sure not to create a repetitive tile pattern on the façade.