Advertisement
The Newspaper for the Future of Miami
Connect with us:
Front Page » Communities » Wynwood streetscape plan gets a thumb’s-up

Wynwood streetscape plan gets a thumb’s-up 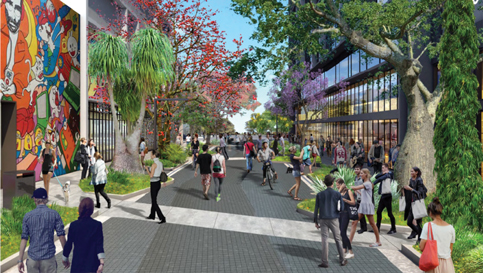 A proposed vision for greener and more pedestrian-friendly streets in Wynwood is a step closer to being realized.

The Planning, Zoning and Appeals board recommended approval of the Wynwood Streetscape Master Plan on Sept. 16. It sets guidelines that would dictate the build-out of Wynwood streets.

The master plan focuses on increasing pedestrianism and social connectivity in the area and incorporating more safety and resiliency features. If enacted, Wynwood’s streets could see a richer and more diverse tree canopy, dedicated bike lanes, wider curbs on some streets, and an increase in crosswalks, including mid-block crossings.

The master plan can be traced to the founding of the Wynwood National Revitalization District in 2015, which had special provisions that allowed for such a plan, said David Snow, the planning department’s chief of urban design, during his presentation.

In 2018, through a solicitation, the city selected local firm ArquitectonicaGEO for the masterplan’s design. The city and the Wynwood Business Improvement District have held multiple charrettes and community outreach meetings as the master plan was developed.

Among the masterplan’s most anticipated features are woonerfs, a Dutch concept for a street that prioritizes pedestrians and cyclists. The streets, which essentially serve as civic spaces, allow for cars, but they feature slowing designs such as zig-zagging that force drivers to slow down.

As is the case with the woonerfs, the master plan features guidelines depending on the street.

During Mr. Snow’s presentation, board members repeatedly asked the big question: Who’s going to pay for this?

“I think it’s a great plan, but I think it’s going to be an incredibly expensive plan,” board member Paul Mann said, “and developers are probably going to try and find creative ways to wriggle out of their end of their responsibility.”

Mr. Snow said the funding mechanism, which will be amended into the revitalization district, will lock developers into paying their share. He also mentioned that these kinds of street improvements open the door for additional state and federal funding and grants.

The legislation currently states that for developments exceeding $1 million along a Wynwood thoroughfare, applicants would have to provide enhancements to the right-of-way that comply with the design guidelines. A developer that can’t do the improvements would have to pay into a trust fund the amount anticipated for improvements, up to 12% of the value of the permitted development.