Advertisement
The Newspaper for the Future of Miami
Connect with us:
Front Page » Profile » Oliver Gilbert III: Moving from Miami Gardens mayor to county commission 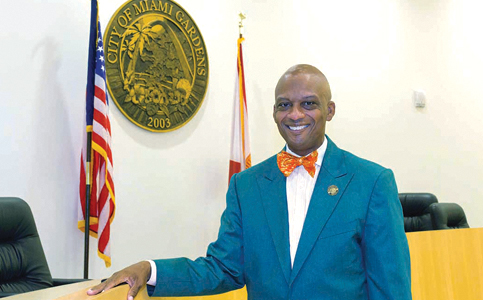 Most of our goals are far more attainable than we believe, according to Oliver Gilbert III. Often, he said, a community’s limitations are self-imposed. And the surest way to succeed in surmounting what obstacles lay ahead? Addressing today’s issues with today’s solutions.

“Whether it’s transit, traffic, the affordability of housing or public safety, we have to figure out how the problems we’re addressing now can be addressed with the tools we have now,” he said. “Sometimes we pretend we only have the tools of the 1920s when we have the innovation, imagination and technology that far surpasses anything they could have comprehended.”

Mr. Gilbert is now in his 12th year of public service, the last eight of which he’s spent as mayor of Miami Gardens. He also is chairman of Miami-Dade County’s powerful Transportation Planning Organization (TPO) Governing Board, the first non-county commissioner to be elected by his peers to the role.

In July, St. Thomas University announced that he will head the school’s new Center for Pandemic, Disaster and Quarantine Research. And last month voters confirmed his next elected office, representing District 1 on the Miami-Dade county commission.

Commissioner-elect Gilbert caught the political bug early out of law school in 2000, when then-state representative Dorothy Bendross-Mindingall hired him as a legislative aide. He then worked as deputy of policy for former US attorney general Janet Reno’s gubernatorial campaign.

A couple years later, after working first as a prosecutor and then in private practice, he vied for the mayoralty of the newly incorporated City of Miami Gardens in 2003. He lost.

“I learned it wasn’t enough to have good ideas and to work hard; you have to have a good campaign structure and understand the process of getting elected,” he said. “Just because you have a good message doesn’t mean it’ll be communicated to everyone. You have to find a way to do that.”

He kept active at city hall over the next five years, fine-tuning his political methodology. In 2008, he was appointed to the city council. Four years later, he again ran for mayor. This time, he won. Four years after that, roughly 66% of his voting constituents re-elected him to a final four-year term.

Moving onto the next chapter of his public service career, toward new and broader challenges and prospects, is exciting, he said.

“There’s an opportunity for us to look at problems and issues confronting the community collectively and ask difficult but probing questions like, ‘What do we really want?’ and ‘What will it take to be great?’” he said. “We can answer them today in ways that are different from how they could have been answered 50 or even 10 years ago.”