Advertisement
The Newspaper for the Future of Miami
Connect with us:
Front Page » Business & Finance » Classy Miami Beach designer bus stops get no operator bids 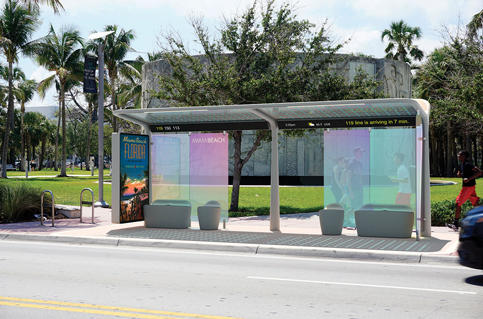 Miami Beach transportation officials want to add shelters to all 300-plus city bus stops, but after an original solicitation was deemed too pricey for vendors they are asking the city commission to offer potential bidders new terms.

Over the past few years, the city has worked with Acai Associates and Italian firm Pininfarina to design the new bus stops, said city Director of Transportation Jose Gonzalez, spending over $500,000 in the process. The result was four unique bus stop designs differing in size and cost that could be placed at different locations in the city according to each location’s popularity and amount of available space.

According to Mr. Gonzalez, the smallest structure would cost roughly $50,000 per location to install, while the largest would cost roughly $150,000. The original hope, he said, was that contractors would pay for construction costs via an agreement with the city that would allow them to make the investment back through advertising profits. Miami Beach, he said, would also get a share of the funds. Contracts, he continued, would have ranged from 15 to 25 years for building and maintenance.

However, Mr. Gonzalez said, the original solicitation received no bidders, and industry leaders cited cost and lack of flexibility as the biggest issues. As a result, the city worked with Pininfarina to develop less expensive versions of the shelters, but Mr. Gonzalez said the reduced price estimates were not yet available.

The new solicitation for bidders, which city commissioners are to vote on this week, allows for more flexibility in the agreement process, including an option to suggest and work with the city on modifications to the original design or new design concepts

According to Mr. Gonzalez, there was no target cost range for the original shelters. Bidders, hopefully, would be able to make their money back through advertising profits.

“The goal is for the contract to be at no cost to the city – and with a revenue share to the city,” he said. The department’s goal is still for vendors to be able to build a version of the Pininfarina shelters at all 300-plus city bus stops, though more flexibility will be given with the new solicitation. At the moment, he said, roughly 100 of the city’s bus stops have shelters in place.