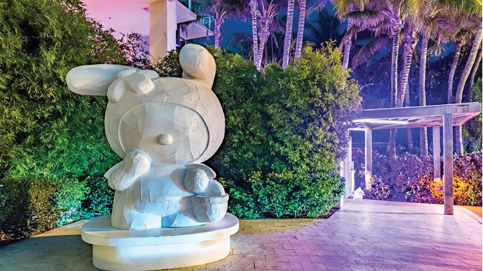 Covid-19 has convinced many Miami-Dade residents to embrace the outdoors, and the Bass Museum is looking to build on this trend by spearheading the Art Outside program, which aims to highlight and educate the community on public art in Miami Beach.

“With works ranging from monumental sculpture, neon, to sound and video, and participatory artworks, Art Outside is a public art exhibition initiated by The Bass that offers residents and visitors the opportunity to see and experience a network of public artworks throughout Miami Beach,” the project’s website says.

Silvia Karman Cubiñá, the museum’s executive director and chief curator, told the Miami Beach Art in Public Places Committee this week that the plan is to create a walkable route connecting all of the pieces and potentially add a few more. Artwork, she said, includes pieces from partner organizations including the W South Beach Hotel, Wolfsonian museum, Miami Beach Urban Studios and the City of Miami Beach-Art in Public Places.

“We’re trying to unify a lot of the major works,” she said, though the exact route is still being worked on and future routes could follow if it proves popular. The first route, she continued, would go from the Bass to the Miami Beach Convention Center before heading toward Lincoln Road and then a nearby boardwalk, where a photography exhibition will be curated.

As the weather improves, Ms. Karman Cubiñá said, the organization will look to create an exercise route by tracking how many miles the trail is and adding “bells and whistles” such as QR codes that walkers and runners can scan for more information as they stop to catch their breath.

Indeed, Ms. Karman Cubiñá said the organization was looking at four new exhibitions to add to the route, including two that would be placed at Miami Beach City Hall.

The first work under consideration, she said, is the “Phaphama, at Cassilhaus, North Carolina 2016” by South African artist Zanele Muholi, which appeared at Art Basel in 2017.

“Her work is about race,” Ms. Karman Cubiñá told the committee, “but it’s also about gender and sexuality norms. She is non-binary in her gender, and her beautiful self-portraits really reflect that range.”

This work, she continued, would be placed on an exterior wall of Miami Beach City Hall. A second work also poised for this location, she said, is a piece by artist Tavares Stachan that features the words “We are in this together” in cursive print on a lighted neon sign. Considerations for the placement of this piece, she continued, would have to include how to wire it safely.

A third artwork by Glexis Novoa, Ms. Karman Cubiñá said, will be a geometric-urban landscape positioned on a sidewalk en route.

Finally, she said, a fourth piece that is still being planned out may be a “rather large garden” in Collins Park featuring various species of indigenous plants.

When asked by a committee member about the project’s proposed timeline, Ms Karman Cubiñá said the new exhibitions would be up “whenever we can get them installed” according to local permitting processes, ideally before Miami Beach Art Week in December.