Advertisement
The Newspaper for the Future of Miami
Connect with us:
Front Page » Government » Series of snags adds four months to Miami-Dade courthouse construction 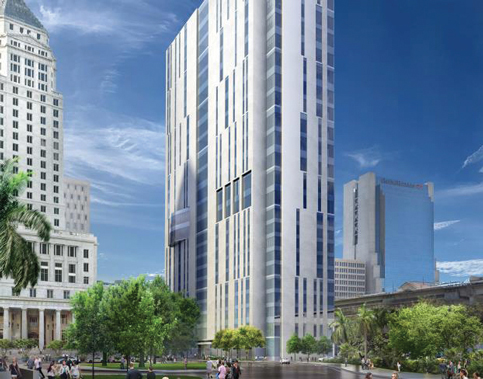 More than half a year after breaking ground, the builders of the new civic courthouse in downtown Miami have hit several snags that have added at least four months to the project’s timeline.

A July report from Plenary Justice Miami, the development team behind the courthouse project, notes several setbacks that have pushed back the building’s opening from January 2024 to May 2024.

Those problems include a six-week delay in completing project designs to reflect changes Miami-Dade County requested, removal of a sewer access manhole and “associated conduits” and relocations of an underground Florida Power and Light conduit cluster, a water cooling line and a 5G pole AT&T erected on the southeast corner of the courthouse footprint.

The report quoted AT&T’s Mike Krissel as saying that moving the 5G pole could “conservatively” take “8 to 9 months, assuming everything aligns perfectly.”

Legislation signed by current Gov. Ron DeSantis and his predecessor, US Sen. Rick Scott, limits the say local Florida governments have in where telecommunication companies can put poles for fifth-generation wireless (5G) technology.

Further, localities can’t force telecoms to collocate 5G small cell antennas on poles, meaning many more will go up than would otherwise be necessary.

Plenary Justice personnel wrote that “the 5G pole was not shown on the bid drawings” it based its proposal on in 2019.

“Specific impacts resulting from this issue are unknown at this time, but this may result in cost impacts and delays to the schedule,” the report said.

Other hindrances could come from additional soil contamination discovered on the site “beyond what was indicated in [county] documents,” the report said, adding that the “schedule impact, if any, is being determined.”

Impacts from the coronavirus pandemic “are not yet known however appear to be insignificant compared to other ongoing impacts.”

The project schedule now shows work to excavate the building’s basement running from Dec. 20 to April 7, 2021, when foundation activities are to begin.

The building is to have permanent power and air conditioning a month thereafter. The team expects to then begin work on the inside of the 640,000-square-foot structure, building out 46 courtrooms with shell space for an additional four, parking for 59 vehicles, offices for court administrative and clerk personnel and other interior and exterior aspects.

On May 16, 2024, tentatively, the building will be ready for occupancy.

Mr. Chatlos could not comment for this story at the time of this writing but sent Miami Today the Plenary report.

Plenary Group Vice President Mike Schutt said Tuesday that the delay-causing issues listed in the report are “pretty typical” for this type of project.

“Our teams are working with the county to try to find the best ways to have them resolved with the minimal possible impacts,” he said. “What’s really key, from our perspective, is the collaboration and strong working relationship with the county.”

The new courthouse will rise next to the 92-year-old building it’s replacing. For years, the old building has drawn complaints of declining conditions, from cramped and outdated court spaces to poor insulation and mold growth.

Voters in November 2014 rejected issuing $390 million in bonds for the new courthouse. The county then sought private partners for the project. Following site preparations, appraisals and a pre-submittal conference in 2018, it received five bids

Plenary Justice undercut its closest competitor by 20% to win the contract. Over 30 years, the county expects to pay Plenary $852.2 million, beginning with a first-year payment of $25.4 million coming once construction is done.

Plenary will be responsible for the courthouse’s operations and maintenance for its first three decades after completion, including cleaning, refurbishment and upkeep of its elevators and air conditioning.

If Plenary does not meet agreed-upon standards during that time, the county can reduce its annual payments.

Once major construction commences, Mr. Schutt said, vehicular access to the nearby Cultural Plaza and its two main tenants, HistoryMiami Museum and the Main Library, will never obstructed.

“There will be continual, seamless access to those sites,” he said, “for the users and their suppliers throughout.”