Advertisement
The Newspaper for the Future of Miami
Connect with us:
Front Page » Arts & Culture » Miami Beach, minus 80,000 Art Basel visitors, vows to save Art Week 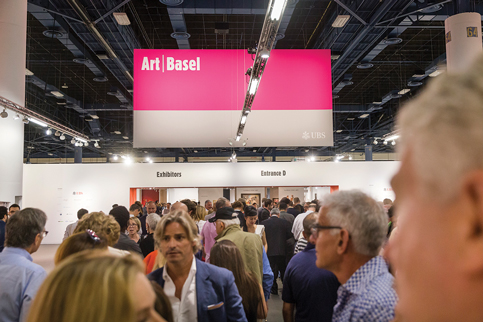 The cancellation of Art Basel will cost the City of Miami Beach and Miami-Dade County millions in lost tax revenue and economic activity, but officials are working to ensure that some form of Art Week will still take place.

Art Basel was scheduled for Dec. 3-6 at the Miami Beach Convention Center, but organizers announced Sept. 2 that it would be cancelled due to Covid-19 complications and uncertainty. This decision, said Heather Shaw, Miami Beach’s assistant director of tourism and culture, will probably cost the city roughly $1 million in lost resort taxes alone.

The impact on the county will be far bigger. Brandi Reddick, Miami Beach’s cultural affairs manager, told the city’s Cultural Affairs Council on Sept. 3 that Art Basel “generates about $16 million in revenue for our community.”

Roughly 80,000 people visit for that weekend, he said, and some hotel room rates can trend toward $1,000 per night. In order to accommodate Art Basel to the fullest extent possible, the New York Times reported, Miami Beach had planned to waive its Convention Center rental fee. While the mayor said he was disappointed that the event had to be cancelled, he said he trusted the organizers’ decision.

“Given the current situation regarding the pandemic’s impact, which spans from South Florida to other parts of the country and the world; limitations and uncertainty about the staging of large-scale events; international travel restrictions and bans, as well as quarantine regulations within the United States and internationally, alongside other factors,” a press release from Art Basel leadership stated, “Art Basel has no other option but to cancel the 2020 edition of Art Basel in Miami Beach.”

“Art Basel and Art Miami have announced that they are not holding their fairs,” he said, “(and) we are also waiting for news from the remaining satellite fairs and festivals throughout our community, which we think will follow suit.”

But, he continued, local cultural institutions play a big role in Art Week as well.

“Our anchor arts institutions are what built the fair and festival circuit of Miami Beach and Art Basel,” Mr. Copeland said, “so we want to be able to celebrate that. We think that this year could be a great opportunity to really engage with locals to make Miami Art Week a locals-only experience. We also are looking for opportunities to engage hotels that will be losing millions of dollars in lost revenue.”

“We’re already seeing local arts groups step up and indicate that they want to do something that reflects the passion for art in different places in our community,” said Mayor Gelber.

According to Ms. Shaw, not all Miami Beach festivities have been called off. Untitled and Scope, she said, are just two of the festivals that will probably still show this year.

“There’s still a lot of momentum around (Art Week.)” Ms. Reddick told the Cultural Affairs Council. “And while it’s a little bit too early to tell what is going to happen yet, we are getting together all of our cultural organizations (and) reimagining what Miami Art Week looks like now.”

Some projects are already in the pipeline, she said, including a curated program that will highlight public art around the City of Miami Beach.

“It won’t be the same, but we still want to have a week where people can experience everything,” Ms. Shaw told Miami Today.

Plans for next year’s Art Basel, she said, are already in the works, and the show’s organizers have had a long partnership with the city. Planning efforts, Mr. Gelber said, are ongoing, as Art Basel staff are constantly working with city officials to nail down details.

Art Basel Miami Beach 2021 will take place Dec. 2-5, with preview days Dec. 1 and 2, according to the release. Galleries that would have participated in the 2020 fair will not be charged booth fees for this year, and their application fees will roll over until 2021.

“These digital events,” the release said, “will be followed in December by Online Viewing Rooms that will be open to all galleries accepted to the 2020 edition of Art Basel in Miami Beach.”

One Response to Miami Beach, minus 80,000 Art Basel visitors, vows to save Art Week