Advertisement
The Newspaper for the Future of Miami
Connect with us:
Front Page » Top Stories » 250-truck concrete pour key step on I-395, Signature Bridge project 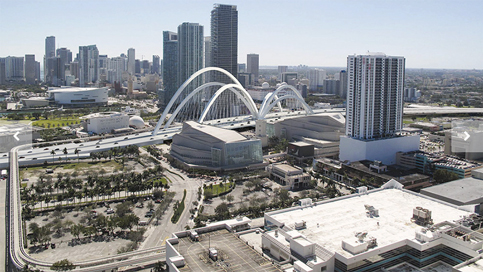 A parade of 250 trucks pouring concrete in a 12-hour span later this month will mark the next big step as the Florida Department of Transportation and the Archer Western – de Moya Group Joint Venture continue to make good progress on the I-395/SR 836/I-95 Design-Build Project.

The work includes a “Signature Bridge” over Northeast Second Avenue and Biscayne Boulevard, an upper deck of traffic built over SR 836 and the Miami River, and the addition of one lane to the northbound entrance to I-95.

On I-395, all 128 Auger Cast Piles or ACPs, a type of drilled foundation, have been installed for the signature bridge center pier and the contractor is currently excavating the foundation area, said Mr. Gonzalez in his latest status report on the massive project.

“In late September, the floor of the foundation will be poured for that pier. This operation will require approximately 250 trucks delivering concrete over a 12-hour period,” he wrote. “The foundation is expected to be completely poured out in mid-December 2020 with approximately 500 concrete trucks being used.”

He said nighttime ACP operations continue east of Northwest Second Avenue and north of I-395 and will be moving to the area east of Biscayne Boulevard and south of Northeast 13th Street in mid-September.

More than 550 ACPs have been installed to date for the I-395 signature bridge and segmental bridges.

Arguably the most dramatic change along I-395 is the new suspension bridge crowned by six rainbow-shaped, 330-foot arches.

Erection of bridge segments began just east of Northeast First Avenue in mid-June and about 40 segments have been erected to date.

The contractor is closing Northeast First Avenue from Northeast 13th Street to I-395 at night to safely install the segments over the roadway.

In late-September, the ramp from North Bayshore Drive to eastbound MacArthur Causeway will be closed to allow construction of the signature bridge arch foundations and the new ramp to the causeway.

A left turn lane on southbound Biscayne Boulevard will be added to allow access to eastbound MacArthur Causeway during the construction of the bridge and new ramp. Mr. Gonzalez said this detour will remain in place until the project is done.

On I-95, the contractor continues replacing concrete pavement between Northwest Eighth Street and Northwest 29th Street. Nighttime closures and detours allow workers to expedite this.

On Sept. 9, the contractor was to close the outside northbound lane on I-95 for about three weeks from Northwest 14th Street to just north of Northwest 17th Street. Drivers headed north on I-95 can stay in the left two lanes to keep going north or take Exit 4A to continue north on I-95 or access the eastbound ramp to I-195/Julia Tuttle Causeway.

This work will allow the contractor to continue widening the ramp from eastbound SR 836 to northbound I-95 from one to two lanes to improve safety and ease congestion.

On SR 836, workers have completed widening several bridges over Northwest 17th Avenue and continue bridge widening from Northwest 12th Avenue to I-95.

“Several traffic shifts have been implemented to allow for work in the median. Sections of the median have been removed between Northwest 12th Avenue and the Miami River to allow for foundation work and construction of support columns for the double-decker,” Mr. Gonzalez wrote.

Auger Cast Pile installation for the double-decker foundations is underway west of Northwest 12th Avenue, with the operation moving west toward the Miami River.

So far, about 70 ACPs have been installed for the SR 836 double-decked section foundations.

Mr. Gonzalez said the contractor continues to work on foundations and columns for the widening of the eastbound SR 836 ramp to northbound I-95 that will support the additional lane.