Advertisement
The Newspaper for the Future of Miami
Connect with us:
Front Page » Transportation » South Dade seeks formal Metrorail-ready program 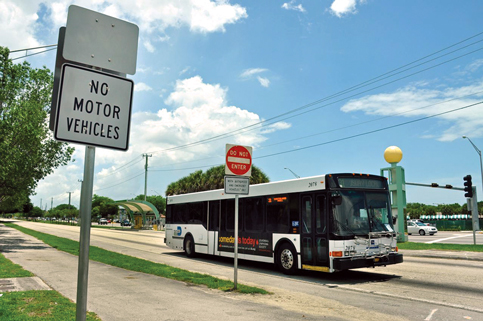 When Miami-Dade’s transportation board voted to upgrade the South Dade Transitway with bus rapid transit (BRT), Metrorail advocates were assured that when ridership gets high enough, the corridor will be converted to rail.

Now they want it in writing.

County commissioners Monday passed a resolution by Dennis Moss cosponsored by Esteban “Steve” Bovo, Daniella Levine Cava and Barbara Jordan directing Mayor Carlos Giménez to report in a month what has and will be done to ensure that the route can handle future rail.

The report must specify contract requirements for rail convertibility along the 20-mile corridor. Commissioners are to vote today (9/3) whether to award OHL USA Inc. the $368.2 million design-build contract.

The South Dade Transitway, or South Corridor, is the only one of six busy commuting corridors identified in the county’s 2016 Smart Plan to get full funding and a rapid transit mode selection.

It was the first corridor for which county consultant Aecom made a recommendation. The mayor concurred, championing BRT as “rail on rubber tires,” with prepayment, level boarding, “iconic” stations, signal preemption and intersection crossing arms.

The transportation board, comprised of all 13 county commissioners, nine municipal officials and one school board member, voted 15-7 in 2018 for BRT from Kendall to Florida City.

The board stipulated that the transitway would shift to Metrorail once weekday ridership hit 35,000 – 10,000 higher than Aecom projected the mode would attract by 2040.

State and federal transportation agencies each put $100 million into the project. The county will cover the rest from the countywide half-percent sales surtax.