Advertisement
The Newspaper for the Future of Miami
Connect with us:
Front Page » Arts & Culture » Accessibility to historic Vizcaya under microscope

Accessibility to historic Vizcaya under microscope 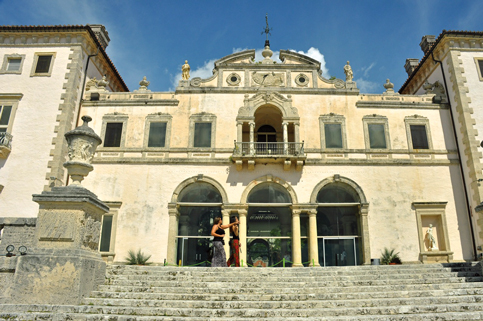 In March, just before the pandemic prompted closures and stay-at-home orders in South Florida, residents from Gran Via Apartments, an elderly housing community in Outer Westchester, took a trip to the Vizcaya Museum and Gardens.

Once they got there, they ran into a multitude accessibility issues.

The floors of the estate, built nearly a century ago, were uneven in places. Many parts of the grounds both inside and in the gardens outside couldn’t be accessed by wheelchair.

“Mind you, none of the people in the group had a wheelchair requirement, but some couldn’t stand for a long time and were asking for wheelchair assistance,” said Ana Bustamante, chief of staff for Miami-Dade Commissioner Joe Martinez, whose office sponsored the trip. “We were told there was no elevator for them to get to the second floor of the house, which is where all the bedrooms are located, which all of them wanted to see,” she said. “You’re paying for the entrance, for a tour, and you can’t even see some places because they’re not providing accessibility to you.”

A report is due in 90 days detailing the mayor’s findings. It is to list what can and should be done to improve the museum property, what the necessary improvements will cost and how long they will take.

Construction of the Vizcaya Museum and Gardens, the former home and estate of businessman James Deering, was finished in 1923. The site, listed as National Historic Landmark in the US National Register of Historic Places (a designation only 3% of places listed on the register receive), welcomes more than 300,000 visitors per year.

Joel Hoffman, the museum’s executive director, said he and his staff try to make the property as inclusive and accessible as possible. Although that may not be so easy, he said.

“There are cultural organizations that were purpose-built after the advent of the Americans with Disabilities Act (ADA), and it’s certainly the case that such facilities – especially interior museum facilities – are constructed with ADA in mind,” he said. “But Vizcaya was built as a private home more than a century ago. It’s a landmark and was not designed with accessibility in mind.”

Mr. Hoffman said he welcomes working with county staff to address what problems exist there but said certain aspects of the Coconut Grove property may never meet ADA standards without jeopardizing its recognition on the national register. The garden has unpaved terrain in some areas. In other parts of the garden, chert rock laid to ease foot travel isn’t very wheelchair friendly. And many interior and exterior spaces across the 43-acre property connect by steps.

The museum has two wheelchair lifts to help visitors gain access to the grounds from the parking lot. One works, though Vizcaya temporarily removed its four on-site wheelchairs in May to reduce touchpoints during the pandemic. The other still awaits repairs for damages sustained during Hurricane Irma in 2017. Neither goes to the museum’s second floor.

“We’ve been told by architects that it wouldn’t really work to put a new elevator in [building],” Mr. Hoffman said. “If we find something to the contrary, great.”

For several years, county ADA Coordinator Heidi Johnson-Wright has worked with Vizcaya to train staff and on “less formal site assessments of the property,” he said. In lieu of accommodating wheelchair access, the museum offers a free virtual tour on its website, complete with 360-degree views, ambient sound, music and written details about each area.

“Certainly no one is going to suggest a virtual access tour is the same as visiting the second floor,” Mr. Hoffman said.

Miami-Dade in 2017 entered into a long-term operating and management agreement with Vizcaya Museum and Gardens Trust Inc., a local nonprofit. The county still provides funds for “upkeep, maintenance, renovations and operations … in the form of annual budget appropriations and grants,” Mr. Martinez’s item said.

As such, the county still has the power to inspect and change the property as it sees fit, the commissioner said.

“It’s still a county facility – always has been – and if they’re going to charge you to be able to see the grounds and everything else, there should be accessibility to it,” he said. “I know they may come with this BS story of it being historic and them not being able to change it – I got that – but there are ADA rules, and it’s a county building.”