Advertisement
The Newspaper for the Future of Miami
Connect with us:
Front Page » Government » Hunt on for new sponsor for Miami Heat arena

Hunt on for new sponsor for Miami Heat arena 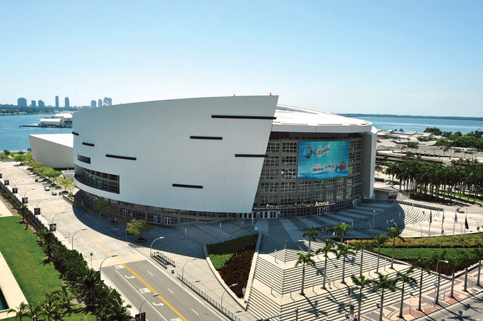 The hunt for a Miami Heat arena title sponsor goes on despite an economic slide and fan-less games due to Covid-19, an official close to the search said.

“We’re still working on it,” he said. “The consultants are working on leads, multiple leads. We’re hopeful.”

Time ran out in December for the county to replace its 20-year, $42 million deal with American that began Dec. 31, 1999, when the arena opened, before it began to incur an uncompensated $2 million yearly fee.

Mr. Marquez told Miami Today, and American confirmed, that the airline was “not in the mix” as future sponsor. In lieu of a sponsor, Miami-Dade must pay Heat sister company and arena manager Basketball Properties Inc. four $500,000 installments a year, with the third due Sept. 30.

Miami-Dade took over sponsorship duties from the Heat Jan. 1 for the county-owned arena until June 30, 2030, with one 10-year renewal option.

Previously, the county had paid Basketball Properties $2 million from American’s naming rights money plus about $6.4 million. Commissioners in 2018 replaced that deal with the current one, in which the county pays the arena manager $2 million a year and keeps whatever it gets from a sponsor.

Myles Gallagher, president of The Superlative Group, to which the county will give 5% of the yearly title income, said arena naming is “conservatively … worth at least $6 million.” Several companies were reportedly interested.

The Miami Herald in November wrote that “non-basketball sources briefed on the situation” said TD Bank was in “serious discussions” with the county. Earlier, Miami-based adult film studio BangBros said online that it offered Mr. Gallagher $10 million for the rights.