Advertisement
The Newspaper for the Future of Miami
Connect with us:
Front Page » Top Stories » Jackson Health’s losses decline, breakeven for year in sight 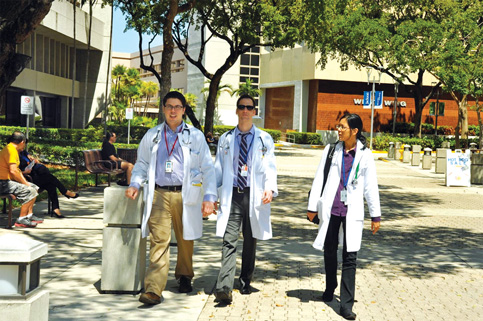 Even though coronavirus cases surged in July as Miami-Dade reopened, Jackson Health System’s losses have steadily declined over the past few months, placing it on track to break even through the end of the fiscal year, according to CFO Mark Knight.

That means Jackson might not have to touch a cent of the $150 million in Wells Fargo credit that county commissioners OK’d in May to help sustain the system through this uncertain time.

Mr. Knight told Miami Today that the system’s cash collections have been strong, with insurance covering non-Covid and Covid patients alike, and uninsured patient care paid by the government.

“We had put that line of credit in place as a fallback safety net in case we had cash flow problems,” he said. “It was really only meant to be emergency draws, and we haven’t had a need to do that.”

In April, Jackson Health System CEO Carlos Migoya said that as elective surgeries dropped to zero in March, the hospital system had seen a roughly 40% revenue dip. The result, he said, was a $13 million shortfall that month.

“It’s definitely getting better,” he said, adding that elective surgeries, which resumed but were again paused in July, will start again this week. “Our Covid volumes – inpatient cases – have dropped significantly in the last two weeks.”

Jackson went from admitting 10 to 15 patients daily in April to a flood of 50 to 60 patients admitted when Covid-19 cases surged in July. Now the number is down to a more manageable 20 or so new patients a day. Projection models estimate further drops to between five and 10 patients admitted daily over the next month.

But with much countywide spending in a lull, the system has lost $85 million so far this year. Assuming Jackson bleeds the same amount of money in August and September as it did in July, Mr. Knight said, the $100 million in Cares Act aid it received should shore up all losses.

“We’re not looking for additional funding from the county,” he said. “It appears we’re about whole, about break-even through the end of our fiscal year, Sept. 30. Then we’ll see what happens thereafter.”

Jackson hasn’t furloughed or laid off any of its employees to offset costs. On the contrary, the system for more than a month has added state-contracted nursing and clinical personnel to help its existing staff handle high patient volumes, particularly in intensive care units.

Now that the surge has abated, Mr. Knight said those “bounty hunters” are beginning to move on to where they’re most needed next.

“We’re transitioning off of them now,” he said. “It’s been a huge spend on our behalf by the state – an incredible gesture, but also incredibly needed.”