Advertisement
The Newspaper for the Future of Miami
Connect with us:
Front Page » Government » Florida House ratings give bad grades to Miami-Dade, cities 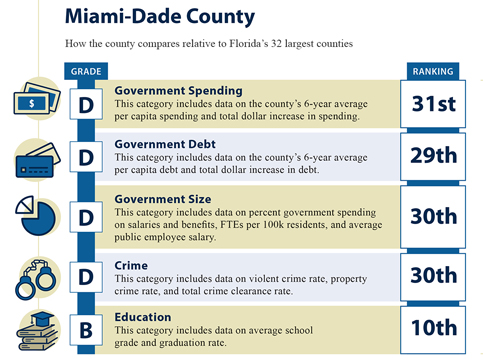 A $117,000 website that grades cities and counties based on spending, crime and education was rolled out by the state House last week. Miami-Dade County cities got mixed reviews, while the rankings for the county itself were weak at best.

The House worked with Sachs Media Group on the project, with some work done in-house – video production, the press release and a social media launch – to save on costs, according to a House spokeswoman.

House members in March approved a bill that included a similar proposal, but the measure died in the Senate. The House then went ahead on its own with the project.

In February, when the grading proposal went before the House Appropriations Committee, Rep. Joe Geller of Aventura wondered if communities could face low grades for having incurred debt to provide a higher quality of life.

The local-government grading proposal also drew opposition from the Florida League of Cities and the Florida Association of Counties.

“If you have a city that doesn’t have a lot of residents, they’re heavily tourists or a college town, you’re going to have fewer residents though your budget might be quite high,” Laura Youmans, legislative counsel for the Florida Association of Counties, told the Appropriations Committee. “That budget is going to serve the industry and businesses and the visitors there, so that would skew your numbers and make that city look worse and make cities that may not be doing as well better by comparison.”

The House news release said only “raw and per-capita data” was used, “with no value judgments made regarding the relative importance of any one factor over any other.”

Some of the county’s best-known cities, by contrast, were graded at lower levels. The City of Miami got an A for government debt, B for education, C for government spending, and D for both government size and crime.

Ranked lower still was Miami Beach, which got a C for education and a D for everything else.

Miami-Dade County did only slightly better than Miami Beach, ranking B for education and D for everything else.

Not every municipality is graded. An “N/A” is posted on report cards for some tiny municipalities where no data was available.