Advertisement
The Newspaper for the Future of Miami
Connect with us:
Front Page » Government » Whether Trump or Biden wins, so do stocks

Whether Trump or Biden wins, so do stocks 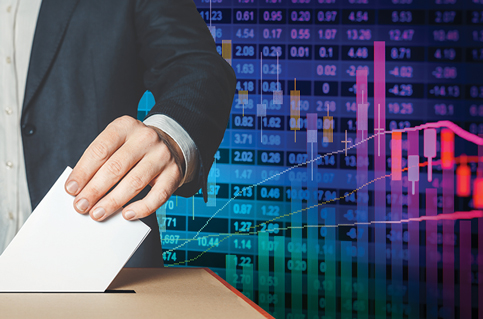 While all eyes are on the 2020 presidential election, experts believe one thing that will not be affected by its result is the long-term security of the stock market.

If presidential election history repeats itself, the difference in market performance under one administration versus another will likely be negligible, the experts say, but regardless of the victor one threat investors should be wary of is the possibility of inflation.

While some short-term fluctuations in the stock market could occur, and have after past elections, Scott Montgomery, a director and financial advisor for Provenance Wealth Advisors, said that the market has historically continued to improve over time and that the best advice for investors is to “stay fully invested and stay calm.”

“In any 30-day or 60- or 90-day or even one-year period of time, the markets have been fairly volatile, and that volatility (has been) exacerbated in the last seven to 10 years,” Mr. Montgomery said. But, he continued, an investment in the S&P 500 or its predecessor made in the year of any presidential election since 1936 would have yielded positive results save for one timeframe: the presidency of George W. Bush.

Mark Del Pezzo, CFA, an instructor of finance and investments at Florida International University with more than 20 years of experience as a portfolio manager, told Miami Today that while the months leading up to the election and immediately following it may produce a volatile market, any negative activity would likely be short-lived.

Historically, there is a precedent for such quick reactions and rebounds. When President Donald Trump was elected in 2016, Mr. Montgomery said, the market initially dropped, then “rebounded almost automatically.”

A close race or win by President Trump may lead to an initial positive reaction, Mr. Del Pezzo said, while a victory for former Vice President Joe Biden could mean an initial but temporary slump as the market “gets used to” a new administration and possible regulations.

But, in the long run, he said, “markets do pretty well under both Republicans and Democrats; they perform in line with historical norms.”

However, he noted, this year is unique in that the immediate fate of the stock market, as well as the outcome of the election, will be heavily influenced by the possibility of discovering a Covid-19 vaccine or treatment, as well as the state of continued protests nationwide.

When it comes to investing, Mr. Montgomery offers his clients this advice: “Stop watching the news every night.”

“(People) get lost in all the news,” he said, “and they forget to focus on what they’re trying to accomplish. That’s where people get in trouble. They start reacting to very short-term events that over longer periods of time, (end up) being absolutely nothing.”

Though the stock market overall is likely to stabilize no matter who’s in the Oval Office, Mr. Del Pezzo said, some stocks may perform better under one party or another.

With Democrats in office, he continued, environmentally friendly companies, including renewable energy companies, and “cleanup companies” often do well, while companies in the defense, pharmaceutical and traditional energy field typically fare better under Republicans. Consumer companies such as Procter and Gamble, he said, often perform equally well under both parties.

While Mr. Montgomery advised investors to pay little attention to short-term events, one issue he says they must keep an eye out for is the possibility of inflation and of a US dollar that is weakening against foreign currencies due to the rate at which money is being printed by the Federal Reserve.

“(To) defend yourself against (this),” he said, “buy gold, buy other hard assets and globally diversified stocks. These things have tended to defend against that very real issue, and inflation is going to creep back in at some point.”

Additionally, Mr. Montgomery said, the full economic effects of the coronavirus have not yet been felt, and the profitability of companies and industries that have been “artificially supported” by relief programs will remain to be seen.

One Response to Whether Trump or Biden wins, so do stocks