Advertisement
The Newspaper for the Future of Miami
Connect with us:
Front Page » Top Stories » Maritime jobs vacant as companies hunt skilled workers 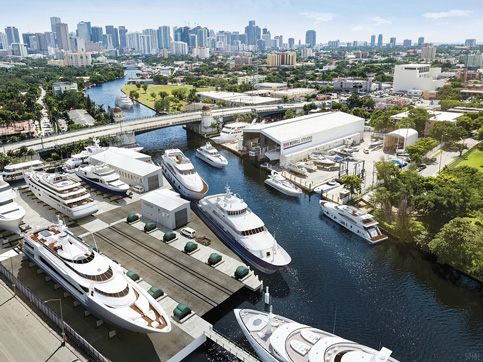 While unemployment is rife in many industries due to the upheavals of Covid-19, maritime jobs continue to go unfilled for lack of skilled employees. In fact, said Horacio Stuart Aguirre, chair of the Miami River Commission, the pandemic may even be contributing to demand.

“In the past six weeks I have visited four boatyards,” he said, “and yacht facilities for larger boats are doing very well. The servicing of a large yacht is very technical and highly complicated, so they require skilled employees, just as Miami International Airport does.

“The industry took a beating in 2007-’08, but now boating is seen as a safe and comfortable alternative to flying. People who might otherwise have flown their families on vacation are now finding going to the Keys in their yacht very attractive.”

Lindsey Hopkins Technical College, governed by the School Board of Miami-Dade County, offers a series of Marine Service Technologies courses in its Transportation Program.

“We started in 2013,” said Nyce Daniel, Lindsey Hopkins’ principal. “The beginning was very challenging, but so far so good.”

Completing the 1,200-hour course takes a little over a year, she said, but “after six months they have enough knowledge to get a paid internship. Five companies partner with us to offer internships.”

Ms. Daniel said RMK Merrill-Stevens, whose large shipyards straddle the Miami River, uses a lot of interns and frequently keeps them on as employees.

Paid internships help, she says, but the program could use more financial support.

“They just have to pass a literacy test and meet with a counselor. We can refer them to a basic program if necessary to prepare them.”

The total cost of the self-paced course is roughly $4,000, “but most qualify for financial aid. Bayside Foundation donates money for that, so most of the time we find a way to assist them.”

Fort Lauderdale-based Maritime Professional Training has been instructing commercial mariners and yachting professionals and enthusiasts since 1983.

“We offer all levels of certification as well as license and document study programs, many of which are United States Coast Guard-approved and recognized by many foreign administrations,” said Vice Principal John Flanagan.

Management-level mariners such as chief mates, masters, captains, first assistants and chief engineers are in high demand, he said – a need that is boosted by the tendency of lower-level crew to go to sea for the first four or five years of their careers and then switch to shoreside jobs.

“One of the highest demands is for entry-level captains,” Mr. Flanagan said, “with what’s known as a six-pack license,” which means they’re restricted to vessels with no more than six passengers, The licensing requirements are an eight-day course and a year of sea time.

There’s also an increasing demand, he said, for lower-level engineers – as well as those at higher level: Fewer than half the masters or engineers in the US Merchant Marines are licensed for unlimited horsepower.

While Mr. Flanagan said the educational requirements for a maritime career are “pretty lax,” experience on some kind of vessel is a plus. That’s something Maritime Professional Training’s free career counseling service can assist with.

“If someone can get on as a deckhand, stewardess or maybe assistant chef and accrue some sea time,” he said, “then we can help them start climbing the ladder.”