Advertisement
The Newspaper for the Future of Miami
Connect with us:
Front Page » Government » Miami International Airport projects rushed in pandemic 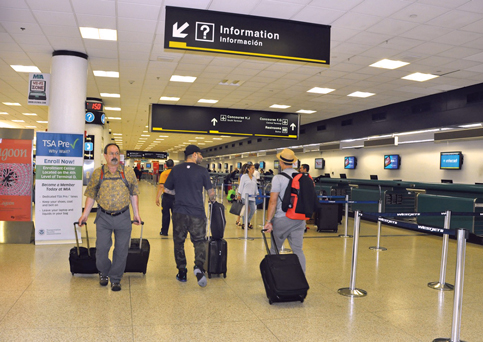 Some big-ticket projects in the $5 billion capital improvement plan for Miami-Dade County’s top economic engine will start earlier than first scheduled. Others set to begin soon are now on hold.

It’s all to minimize harm to an air hub whose passenger numbers plummeted due to the novel coronavirus while taking advantage of that dropoff where possible, Aviation Director Lester Sola told Miami Today.

“The last thing you want to do is invest in a huge project and then not have demand for the capacity you created,” he said. “We want to make sure we’re doing it at the right time, [so] we’ve continued or moved up projects that would have maybe disrupted air travel if we were at full capacity.”

Among the projects provisionally paused: most parts of a multiphase redevelopment of MIA’s Central Terminal, including structural upgrades and new high-tech security and baggage-handling areas, and the demolition of Concourse G to improve aircraft ground maneuverability.

Concourses G and F are now closed “for the most part” for repairs and preventative maintenance. The start date for renovating the Central Terminal, which contains both terminals, hinges on when more travelers return.

“Depending on the full recovery, whether it’s 2021, 2022 or 2023, we may have bought ourselves more time to figure out when the right time is to make the investments in the Central Terminal,” Mr. Sola said. “The demolition [of Concourse G], we’re not proceeding with that because that was all part of the overall Central Terminal redevelopment to expand and create additional capacity.”

Once the Central Terminal project does start, its designs could contrast with what was originally planned, particularly if no Covid-19 vaccine is yet available and safety practices like social distancing and contactless checkpoints are still necessary.

“Airlines continue to take aggressive measures in cleaning their airplanes, and we’re taking aggressive measures, but if a terminal [before] had a capacity of around 55 million passengers, you can’t put in the same amount in the same space,” he said. “Eventually, you’ll have to build a new Central Terminal, but you’ll have to build it with potentially a completely new [concept] for how passengers and employees [move through it].”

County commissioners last year approved the Miami-Dade Aviation Department’s latest capital improvement plan, a 15-year undertaking of nearly 50 projects, of which all but four are at MIA.

Last month, the commission approved the funding mechanism for the plan: $5 billion in “drop-down” bonds.

Unlike earlier MIA improvement programs and their respective funding, Mr. Sola explained to commissioners last year that the flexible bonds can be tapped in different amounts at different times, allowing projects to “start and stop as needed, depending on the economic conditions.”

The projects in the plan vary from constructing new terminal gates, refurbishing others, erecting new buildings, demolishing others and numerous roadway improvements to several additions at the airport’s western cargo facility, modernizations of passenger loading bridges and construction of up to two new on-site hotels.

Some of those projects will proceed as planned, including the development of a new immigration area in the Central Terminal, upgrades to the airport’s fuel farm, cargo area optimizations, and reconfiguration of landing bridges to accommodate new American Airlines aircraft.

“Anything that deals with repairs to taxiways and runways, we’re speeding up those projects and focusing on some of the terminals in order to be more efficient,” he said.

Plans are also in motion to acquire land to the east and west of the airport, for which Mr. Sola said there is “a willing seller.”

“There’s a significant amount of land opportunities available around the airport, especially now,” he said.

Another project, a pending $33 million joint venture between MIA and PortMiami for a new fumigation facility, built on airport land, will replace a facility the seaport demolished while expanding. Once built, both parties would use it.

“The port has some money to invest in the project, the airport has the land, and we’ll be doing a competition – a solicitation – for a project development deal,” Mr. Sola said.

Passenger flows at MIA crashed by more than 93% in May, from nearly 3.8 million arrivals and departures in May 2019 to just 256,910 this May, according to a report from the Aviation Department that commissioners reviewed last month.

Based on figures provided by air carriers, MIA expects year-over-year decreases of 62.4%, 53.3%, 31.2% and 30% in passenger arrivals and departures in September, October, November and December, respectively.

Mr. Sola said his department expects a 50% to 60% restoration in passenger volumes next year. In the meantime, he said, MIA’s financing remains “very good.”

Case in point: when commissioner OK’d the $5 billion bond issues last month, more than $984 million in capital projects in the plan were already underway, paid in part by cash and credit.

MIA also has access to $207 million in support through the federal CARES Act.

“We’re still generating revenue, albeit at a smaller percentage,” Mr. Sola said. “So, while there’s significant money to maintain operations, make payroll and continue [our] maintenance of effort, there’s still a pot of money available to the airport via bonding and commercial credit [with which] we can still build these projects.”