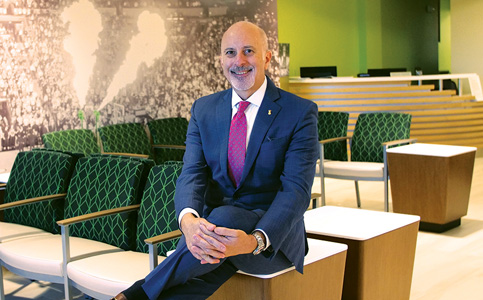 First, as is the case with all reputable healthcare providers, he sets goals for improvement. Every year, he establishes what he calls “bold vision statements” that build affinity with the hospital’s internal and external stakeholders.

“I set annual themes that align with vision and strategy,” he said. “Imagine having a CEO who tells you once a year, ‘The theme for this year is this: we’re aiming for No. 1 in quality.’ That gives you a true-north direction, and I’ve set a theme every year for most of my career.”

He’s also into reinforcing healthy habits, particularly when it comes to rewarding and celebrating the accomplishments of his staff, the support of Baptist’s volunteer board of directors and their positive impact on communities between Palm Beach and Monroe counties.

“If there’s one thing I’ve learned, it’s that rewarding and celebrating accomplishments is so key to closing the loop, recharging the battery and starting another loop,” he said. “I don’t do this alone. I have a phenomenal group of people who form my team, and they define me like I define them.”

In November, he was named CEO of Doctors Hospital and Miami Orthopedics & Sports Medicine Institute. He performs that role while also upholding his responsibilities as chief academic officer of Baptist Health.

As he tells it, the move to Doctors Hospital, which has served the surrounding Coral Gables community for 71 years, only presents new opportunities for growth and advancement, including a new intensive care unit coming to the facility.

“Our emphasis and focus is on being the flagship for orthopedics and sports medicine, but that’s not all we do. We have a phenomenal emergency department, great general surgeons and many other specialty areas,” he said. “It’s viewed as the community hospital for Coral Gables – deeply rooted here, with a strong history.”