Advertisement
The Newspaper for the Future of Miami
Connect with us:
Front Page » Transportation » 7-year smart traffic signals upgrade clock ticking in Miami-Dade 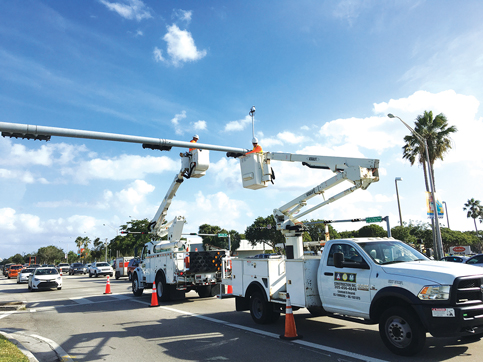 The project is to take about seven years to upgrade roughly 2,600 signals in Miami-Dade, with busier intersections receiving more advanced signals.

Miami-Dade’s Department of Transportation and Public Works has been testing these signals in the county since 2016, initially installing them along the Northwest 36th Street corridor before branching out and signing an $11.1 million project with Econolite Control Products Inc. for the addition of 300 smart signals along the county’s 11 busiest corridors.

Thus far, 291 intersections have been upgraded, and the new project with Siemens will gradually update the rest.

“Smart signals,” Luis Espinoza, a spokesperson for the department, told Miami Today via email, “are capable of rapidly adjusting signal timing according to traffic conditions and speeds. As traffic volume increases and travel speeds decrease, the system will then adjust the amount of green-light time in each direction to help traffic flow better.”

According to Mr. Espinoza, smart signals can also communicate with each other to “maintain optimal timing and communication.” On some busy county corridors, this has reduced peak travel time by up to 33.3%, and Siemens models predict the average reduction in travel time will be around 15%.

“The awarded project to Siemens Mobility,” Mr. Espinoza said, “will upgrade all remaining traffic signals countywide. Every signalized intersection will have detection to allow for efficient operation of the signal.”

“The signals along the major corridors (approximately 1,100),” he continued, “will be provided with more robust detection and adaptive signal controls.”

(and) look forward to implementing an intelligent system that optimizes and integrates traffic operations throughout the county,” said Marcus Welz, CEO of Siemens Mobility’s Intelligent Traffic Systems for North America, in a press release. “Our (technology) will ease congestion, reduce carbon emissions, and enhance quality of life by allowing Miami-Dade residents to spend 15% less time sitting in traffic.”

The initial upgrade of traffic controllers, Mr. Espinoza said, should be complete within four years, with the advanced improvements for busier intersections finished in five years and detection upgrades in seven.