Advertisement
The Newspaper for the Future of Miami
Connect with us:
Front Page » Government » Scooter fees geared for bike paths face detours 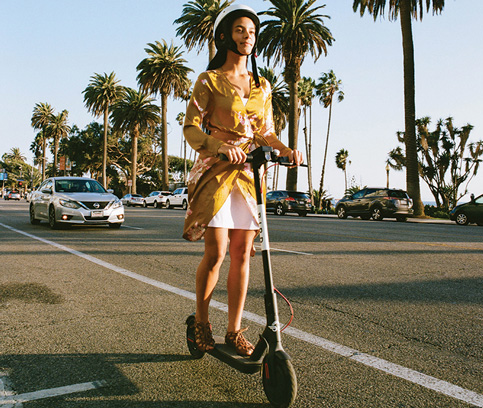 Miami’s electric scooter pilot program was geared to generating funds for bicycle paths. But in the city’s financial strain because of Covid-19, some commissioners are balking at allocating about $1 million the city has collected from scooter fees for a downtown bicycle path network.

Last week, the city commission deferred until September an agreement with the county for the downtown network. Several commissioners said that money could be better used elsewhere.

Lanes would be on Miami and First avenues and Fifth and Sixth streets, with the network bounded by Northeast Second Avenue and Northwest Third Avenue, Northwest 11th Terrace and Southeast Second Street.

Commissioner Joe Carollo began the discussion by saying those funds generated from scooters should go back to the general fund, with the city looking at a $23.3 million deficit this fiscal year. He proposed amending the scooter pilot ordinance to allow those funds to be reallocated.

“Knowing that we’re facing a tremendous hole in our budget for next fiscal year and we’re going to have to make some real tough decisions very, very soon,” he said, “I need to have this money, this sizeable I believe it’s close to a million dollars we have in the pot, go to the general fund to plug up that deficit that we have.”

Commissioner Ken Russell, the strongest proponent of the scooter pilot, acknowledged the city’s shaky financial position but said the commission should approve the agreement with the county, with the city telling residents the funds would go toward bicycle lane infrastructure.

He said that while he has felt significant pushback against scooters from homeowner associations in his district that cite dangers scooters pose on sidewalks, the bicycle network would address those concerns by giving scooters a better alternative.

“For this whole time, this entire year, we generated this million dollars through the scooter program,” he said, “our promise to them was that it will fund the lanes that get those scooters off the sidewalks, it’ll make it safer so the program can continue without being dangerous.”

The scooter pilot is restricted to Mr. Russell’s district, consisting of Coconut Grove, Brickell, downtown Miami, Midtown, Morningside, Edgewater and a portion of Wynwood. According to the city’s website and the ordinance, all funds the city generates from the pilot are to be designated for sidewalk or street improvements within the pilot area.

Commissioners Carollo and Manolo Reyes have opposed the scooter pilot, raising safety concerns while voting against legislation pertaining to the pilot.

However, Mr. Reyes, who is also chairman of the Downtown Development Authority, said he supported the downtown bicycle network because it would be a boon to his e-cargo bicycle pilot that aims to reduce traffic and air pollution caused by large cargo trucks by having the electric bicycles instead deliver parcels within the area. Global courier DHL has partnered with Miami-based REEF Technology to provide e-cargo bicycle deliveries in the urban core.

Commissioner Alex Díaz de la Portilla said it was not lost on him that he was the favorable swing vote in the recently approved scooter pilot extension. But he went on to echo Mr. Carollo’s sentiments that those revenues should be used for more pressing matters.

He was critical of spending city funds on the program with the county, which is set to invest more than $1 million, saying the county has not given the city a fair share of funds from the CARES Act, the more than $2 trillion federally approved economic relief package, of which the county has received nearly half a billion dollars.

“Had you told me back then, ‘Hey, do a program that you totally don’t believe in, be the swing vote in a program you don’t totally believe in, so we can generate dollars, and now we’re going to use dollars to build a bike path for the county,’ I would’ve voted no,” he said.

The path would run 45% on city roads and 55% on county roads, City Manager Art Noriega said.

“We’re not giving money to the county for county roads,” Mr. Russell said. “This a bicycle master plan, which is 10 years delinquent. Many people have been injured and died on bicycles in the city of Miami for lack of having that infrastructure. The whole premise on which I was willing to support the scooter program was that it solves this problem and the problem that’s created by the scooters.”

As conversation wound down, Mr. Carollo reiterated the scooter revenues should go to the general fund. Mr. Reyes said he would consider spending the funds elsewhere if the city used the money to help residents who are struggling because of Covid-19, with the understanding the city would revisit the bicycle network when things return to normal.

Commissioner Keon Hardemon said he wouldn’t want the bicycle network to die because the city is concerned about its finances. “I complete understand the necessity of having the ability to traverse our streets on a bicycle,” he said. “I think the only way that we solve issues is by giving people an opportunity to travel through our city by different means comfortably.”

He suggested revisiting the item Sept. 10, the first of two budget hearings that month before the commission approves next fiscal year’s budget. Commissioners unanimously agreed to defer it to that date.

Since March, the city’s scooter pilot has been offline after a county emergency measure halted shared micro-mobility programs.