Advertisement
The Newspaper for the Future of Miami
Connect with us:
Front Page » Top Stories » On-demand shuttle to debut free along north-south transit 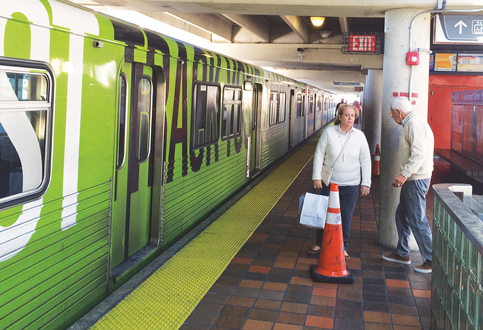 Transit riders in four areas along Miami-Dade’s north-south spine will be able to get to and from Metrorail and the South Dade Transitway on an Uber-like shuttle service set to deploy later this year.

The service will be available to Metrorail riders within a three-mile radius of the Civic Center Metrorail station and the Dadeland area encompassing South Miami, Dadeland North and Dadeland South stations. It will also provide trips up to and exceeding three miles to and from 13 South Dade Transitway stations across Palmetto Bay and Cutler Bay.

Funding for the initial contract term, $4.66 million, will come from state and federal sources. If the county and company agree to renew for three more years, the total contract would cost $9.28 million.

Miami-Dade Transportation spokesperson Luis Espinoza confirmed Monday that despite complications related to the coronavirus, the project “is on track to start toward the end of this year.”

The contract is the result of a request for proposals Miami-Dade advertised March 22, 2019, to which five companies submitted offers. River North, which had no local address at the time it bid on the contract, beat three nonlocal businesses and Freebee, a free, on-demand ride-hailing service that already has a contract with Palmetto Bay and serves 16 other South Florida areas, according to its website.

River North is to provide free rides for “at least” the first three months of its operation here to allow residents to familiarize themselves with the service, county documents show. Miami-Dade Transportation and Public Works will cover costs during that period.

After that, customers in the Civic Center and Dadeland service areas will be charged for rides “in accordance with the Miami-Dade Transit Passenger Fare Structure,” Ms. Moon wrote. Service in Palmetto Bay and Cutler Bay will remain free for the life of the contract.

“However, the cities of Palmetto Bay and Cutler Bay will reimburse the county 100% of the actual net operating and annual cost of the service,” she wrote.

The agreement River North signed June 3 says River North will provide service on weekdays at least from 6:30 a.m. to 7 p.m., although specific operating hours “will be defined during service planning.”

River North will provide a mobile app through which users can order rides, and each vehicle is required to be outfitted with security cameras and related equipment. A portion of the fleet will be wheelchair accessible.

The four regions targeted for service comprise a significant chunk of the county’s riding public. County figures show Metrorail ridership in the Dadeland service zone accounting for about 24% of the system’s total passenger boardings. That’s about 14,000 weekday riders, based on system-wide boarding figures from before the pandemic.

The Civic Center area boasts some 6,000 weekday boardings not counting nearly 800 Special Transportation System riders who either visit four major rehabilitation and training centers nearby or live within a mile of the Metrorail station.

Palmetto Bay and Cutler Bay sit in the middle of the 20-mile South Dade Transitway, which through 2022 will undergo a $300 million upgrade to “Gold Standard” bus rapid transit (BRT). The overhaul is expected to improve travel time along the corridor with prioritized signalization and crossing arms at intersections and providing rail-like service at elevated, climate-controlled platform stations.

Nearly 7,000 of the two cities’ 97,595 combined residents use the transitway daily – a number expected to rise as BRT comes online and denser developments surround stations along the line.

The service will also help to solve a problem Transportation Director Alice Bravo cited in talks with Miami Today earlier this year: lack of parking.

According to numbers from her department, daily parking at all three stations within the Dadeland service area reach up to 98% occupancy every day. Cutler Bay’s sole park-and-ride lot is similarly at near-capacity, and both park-and-ride lots within Palmetto Bay reach full occupancy daily. Civic Center, located in the county’s Health District, has no parking.