Advertisement
The Newspaper for the Future of Miami
Connect with us:
Front Page » Real Estate » With online buys, Doral warehousing in prime position 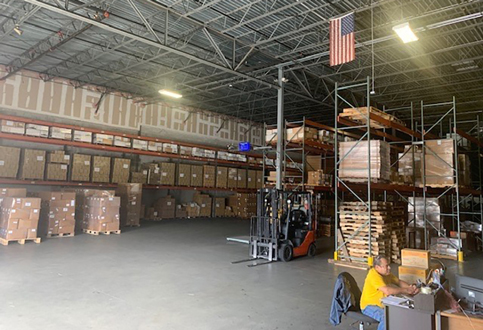 It may be too early to know exactly what effect the pandemic will have on commercial real estate in Doral, but experts say one segment may emerge particularly strong: the industrial market. With consumers buying online now more than ever, a trend only accelerated by Covid-19, demand for warehouse space and shipping centers may well increase.

“The way we shop now has really shifted,” said Jose Maria “Chepe” Serrano, owner of New Miami Realty. “We knew it was coming.” The pandemic, he said, only served to move the needle faster in the direction of Ecommerce, creating a greater demand for industrial space in South Florida.

“Industrial (space), which Doral is very strong in, is something I see holding up very well,” said Brent Palmer, a broker with Palmer Property Group who focuses on commercial tenant and buyer representation. “A lot of companies need that warehouse space.”

Four new industrial buildings have been completed in this submarket in the past 12 months totaling 469,000 square feet, and CoStar reports that three more are currently under construction and will total 210,000 square feet upon completion. More new construction in this area is a possibility, Mr. Palmer said, as demand is likely to rise.

At the moment, the report stated that the average rent for such space in the Miami Airport West region is currently $14.14 per square foot including flex space, though Mr. Palmer said the going rate for “Class A” industrial space was probably closer to be in the $12 range per square foot and rent for “Class B” space is even lower.

The future of other areas of commercial real estate in Doral, however, is not so easy to predict.

According to Mr. Palmer, commercial rent for office and retail space, which has steadily climbed over the past few years, could begin to come down as vacancies increase and landlords work to lock in tenants.

Restaurants, retail establishments and hotels have been particularly hard-hit by the pandemic, Mr. Palmer said, and lagging statistics could soon reflect this as some renters that may want to vacate or downsize are still locked in to leases and have not yet had this opportunity. Some retail space, he continued, may even be converted into warehouse space going forward given the strength of the industrial market.

At the moment, the CoStar report said, the average rental rate for office space in the Miami Airport region, which includes Doral, is $34.99 per square foot. For retail spaces this number is $34.42, but importantly does not include operating expenses, which tenants must also pay.

Maria Juncadella, a managing partner at Fairchild Partners, told Miami Today that commercial landlords have become increasingly flexible as the pandemic wears on. Those leasing office space, she said, may be willing to accept new compromises such as shorter-term leases and discounted rent for a set period. Additionally, she said, more landlords are ready to “kick the can down the road” and offer single-year extensions on leases rather than “hashing out new terms for renewal.”

When it comes to the preferences of these tenants, Ms. Juncadella said, privacy and cleanliness are at the top of the list. Shunning the recent trend of open layouts, many are looking for spaces with private offices and other features that lend themselves to social distancing, such as sidewalk entrances.

According to Ms. Juncadella, mortgage companies, government agencies, technology companies and medical practices are among the top customers for office space in Doral at the moment.

Mr. Palmer also noted the demand for medical space in Doral, which he said many traditional office buildings in the area cannot accommodate.

“Medical is one aspect of office space that (will) always be strong,” he said. “People are always going to need a doctor.” Despite the rise of telemedicine, he added, procedures and some medical appointments simply can’t be done virtually.

“Growth in Doral has been very positive,” Ms. Juncadella said, “but we have not kept up on the medical end.” Medical spaces, she added, do not last long on the market.

One Response to With online buys, Doral warehousing in prime position