Advertisement
The Newspaper for the Future of Miami
Connect with us:
Front Page » Real Estate » Pair of mixed-use towers due in Wynwood

Pair of mixed-use towers due in Wynwood 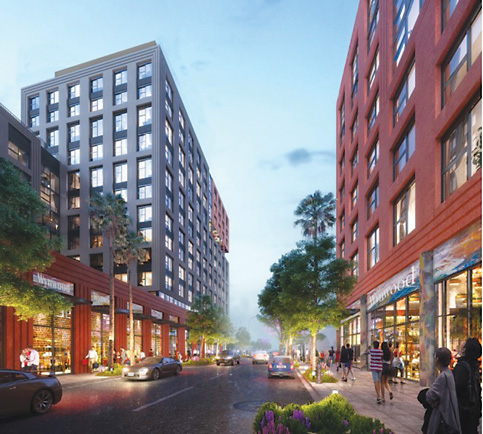 On the eastern side of growing Wynwood a developer plans a large mixed-use residential project that will also bring in new commercial tenants.

The city’s Urban Development Review Board considered the project at a virtual meeting and recommended it for approval with a couple of thoughts.

With a current working title of Wynwood 29, the vast development tops out at 375,383 square feet.

The project includes a 12-story building that connects to an 8-story portion, and a separate 8-story building across the street, with 248 multifamily residential units, 28,071 square feet of ground floor commercial uses, a garage for 372 vehicles and room to park 22 bicycles.

Wynwood 29 will include a pool and amenity deck. The garage is intended for both residential and commercial tenants, as well as patrons.

The project is to have 6,360 square feet of open space.

The collection of parcels is between Northwest 28th and 29th streets, split by Northwest First Avenue.

The 12-story portion is planned for the southwest corner of Northwest 29th Street and First Avenue. The southern end of that block has the connected 8 stories. The ground floor is set for retail uses.

What’s referred to in the plans as Parcel 2 is on the northeast corner of Northwest 28th Street and First Avenue. Planned there is the 8-story building, which has eight levels of parking, seven levels of residential and ground floor retail.

The property is currently vacant and is within both the T5-O and T6-8-O Zoning Transects and the Wynwood Neighborhood Revitalization District (NRD-1) Overlay.

Multifamily structures sit to the east and west of the property.

Attorney Brian Dombrowski, representing the developer, told the review board the project was previously approved in September 2016 and this is a slightly modified design, updated after the company gained an additional parcel.

In a letter to the city, Mr. Dombrowski detailed requests for one warrant and several waivers in order to construct Wynwood 29.

The developer is requesting a warrant to allow on-street maneuverability to access two loading berths. Turning movements associated with more than one loading berth per development may be permitted on-street by warrant, except along Wynwood Corridors, under Miami 21 zoning.

The project proposes on-street maneuverability to access two loading berths from Northwest 28th Street, on the western portion of the project, according to the letter.

The waivers being sought include:

■Up to a 30% reduction in required parking within the quarter-mile radius of a Transit Corridor. The property is within a quarter mile of multiple bus and trolley stops.

■Up to 90% lot coverage through the Flexible Lot Coverage Program, of the NRD-1 Regulations. This additional lot coverage allows both the activation of the roof terrace as well enhancing the pedestrian realm.

“Urban Land Institute studies indicate that smaller units have stronger occupancy rates than typical apartments and individuals choosing to live in smaller units are attracted to them because of a desire to sacrifice space for lower per unit cost and proximity to transit, employment, and vibrant mixed-use neighborhoods,” he said.

The project is designed by the architectural firm of Arquitectonica. Ray Fort, of the firm, described details of the Wynwood 29 project during the virtual meeting.

Mr. Fort told the board: “This quadrant of Wynwood is becoming the residential sector of Wynwood … it is a little bit quieter – there aren’t as many bars – and surrounding projects are planned to be residential,”

Board Chair Willy Bermello said, “I think the project is beautifully designed.”

And while he complimented the bright colors proposed for the project, Mr. Bermello mentioned a concern with the longevity of painted stucco.

“The issue of our Florida sun is that it’s not forgiving when it comes to bright colored paints. [How do you] maintain the crispness of those colors over time?” he asked.

Mr. Bermello asked if they had considered brick for the project.

Mr. Fort said they did not and referred to the size of the development.

“Did you consider glazed tiles? I think the painted stucco is degrading the concept you are trying to promote, which is the industrial [look],” said Mr. Tzamtzis. But he went on to congratulate Mr. Fort for “an extremely elegant presentation and thoughtful design.”

Board member Dean Lewis said the project is “well thought out, well detailed.” He suggested a pedestrian bridge over Northwest First Avenue to connect the buildings.

Attorney Iris Escarra, also representing the developer, said they have discussed a pedestrian bridge but said it would require a separate approval from the city commission. She said such a bridge may be an option.

Board member Ignacio Permuy said: “I commend you on an exceptional job, starting from the massing to the architecture of the buildings … I truly appreciate the screening on the parking garage.”

Mr. Permuy said he understood the others’ comments about the bright painted stucco but added, “I don’t mind the color scheme that much. I understand comments … but this shows levels of playfulness, it shows you enjoyed designing this project.”

Board member Robert Behar said: “I like the whole project. You’ve done a great job.”

A motion to recommend approval of the project passed unanimously, with recommendations including the developer considering connecting the buildings, perhaps with a bridge, and to consider materials other than stucco.