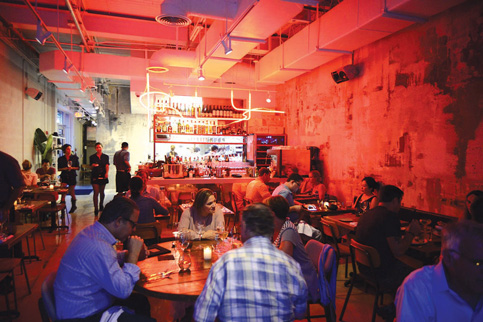 Since the start of the pandemic, the Wynwood Business Improvement District has been ahead of the game by preparing its business members and stakeholders for what was to come.

The improvement district already had an operating model: after the outbreak of the Zika virus back in 2016, leaders devised a game plan for what to do in the event of another economic crisis.

“Right from the get-go and before the order to shut down and social distancing was enforced, we were communicating to our members ahead of time about what was happening and preparing them to apply for all of the necessary federal, state and local county relief funds,” said Albert Garcia, the Wynwood district’s chair.

Daily and weekly e-mails and information were sent to all members, from statistics to emergency orders, which can get very confusing, Mr. Garcia said.

“It’s very difficult to know what applies to what,” he said. “We’ve been a clearinghouse of information. The most accurate and relevant information was provided to help them make the right decisions when it came to their employees and how to reopen and remain open.”

After Memorial Day weekend, destination locations were set for Uber and Lyft pickups and drops-offs. These specific locations were also used for residents to pick up groceries and purchased merchandise, without the need to have contact with another person.

Another program most restaurants were excited about was a recovery plan whereby streets became dining options for patrons, who might still be afraid to eat indoors, Mr. Garcia said. “But right now, it’s the only option we have for dining at our favorite restaurants.”

One of those hopeful restaurants scheduling to reopen in August is Brad Kilgore’s Alter.

“We are planning to use our outside dining wisely by installing about 80 umbrellas,” Mr. Kilgore said. “I think everyone is eager to get back on track, but most importantly, everyone wants to be safe as well.”

With help from Miami city officials with the public works department and parking authority, the program got going. “We received an overwhelming response from restaurants that desperately wanted to set up outdoor dining options,” Mr. Garcia explained.

The improvement district also spent lots of money and creative energy putting together virtual digital marketing initiatives to promote businesses that are open at no additional expense to them and worked with community members to keep them afloat, he said.

With over a 50-block district coverage, another program that is wrapping up and in its final stages is the first landscape master plan, which will promote walkability and different modes of transportation. “With crosswalks, landscaping and public street furniture, Wynwood will be a more welcoming place to visit,” Mr. Garcia said.

The Virgin Trains (Brightline) commuter rail station proposal, which would enable them to construct five commuter rail platforms along the northeast corridor of the Strategic Miami Area Rapid Transit Plan, was approved by the Miami-Dade County Board of County Commissioners on June 2 for a 90-day period to finalize the agreement to bring commuter rail to the county including an Edgewater-Midtown-Wynwood station with service to start in 2022, he said.

The first phase of the project is expected to cost $75 million to complete, which includes the construction of rail platforms and infrastructure. The county is proposed to pay $29 million per year in rent. The second and third phases of the project would further expand rail service and amenities costing approximately $100 million and $350 million, according to the Virgin Trains’ commuter rail station proposal.

Crime is down to record lows as part of a multi-year commitment of providing to the Miami Police Department the right tools to help keep a safe environment, Mr. Garcia said. “With the help of a half-a-million-dollar approved installations of over 45 cameras, business owners have a sense of security, while the cameras act like another set of eyes for the police, where they can go back and see all footages of alleged robberies and hit-and-runs,” he said.

“Every year we face a lot of challenges,” he said, “which helps us grow with long-term planning, where property owners and business owners can see their dollars go right back to the community and for its betterment.”