Advertisement
The Newspaper for the Future of Miami
Connect with us:
Front Page » Top Stories » Midrise housing due in Miami Health District 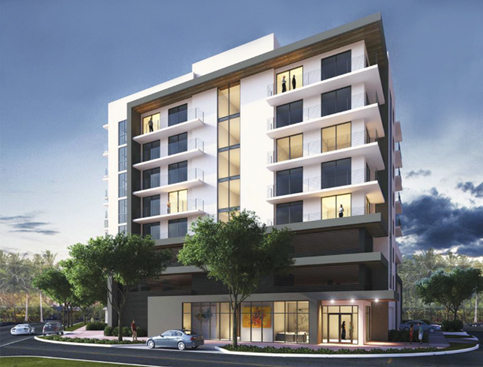 A developer plans to construct an elegant mid-rise multifamily residential building near the City of Miami’s Health District.

Applicant Jesus Gonzalez Pereda presented plans for The Spot, to rise on a vacant lot at 1510 NW 16th Terrace.

The project is designed as an 8-story building with 38 dwellings and parking for 43 vehicles. The city’s Urban Development Review Board at a virtual meeting recommended it for approval with one suggestion.

The project is planned in the Allapattah Neighborhood Enhancement Team or NET District, and is zoned for multifamily residential. The owner is listed as Gonper LLC. Project architect is Carmen T. Diaz, of Caymart Design, Miami.

Ms. Diaz told the board the multifamily residential project is planned with three frontages on an irregular lot. The floor size of the project is 63,620 square feet.

She said the project will be within walking distance to Jackson hospital, and about half-mile from the Metrorail.

The 8-story building is to have three levels of screened parking, an amenity deck on the fourth floor and a lobby facing the street.

The Spot will offer dwellings in sizes of studio, one- and two-bedrooms, she said.

Of the waivers requested, the developer asks permission to have parking into the second layer on a principal frontage.

Working with the planning department staff to help activate the pedestrian realm at ground level, they did follow a recommendation and modified the site plan to include a small plaza.

Ms. Diaz spoke with pride about the overall look of the building, saying the goal was to design a structure that is “very coherent, elegant, minimalistic,” and to be playful with the colors and design.

“I like the building … I think it’s very well done,” said Board Chair Willy Bermello.

Board member Igancio Permuy said the project will be “a great fit for this area.”

Board member Anthony Tzamtzis said, “Very good job. It’s not an easy site. The units are well laid out. You should be commended for the work you’ve done.”

Some board members expressed concerns about the loading area and how the trash containers will need to be wheeled through that area and into the street for pickup.

Board member Robert Behar called it a very difficult site but said the architect tried to reach the best solutions.

“My biggest concern is in the service area, the trash, unfortunately, you’ll have to bring the dumpsters to the center of the street for trucks to pick it up … They’ll have to roll the dumpsters into the street, that’s a real problem,” he said.

Ms. Diaz said they would take another look at that aspect of the layout and design.

A motion was made to recommend project approval with a recommendation for the developer’s team to review the trash situation at ground level, and perhaps modify the plan for better handling of the trash output, which might mean relocating the trash room.