Advertisement
The Newspaper for the Future of Miami
Connect with us:
Front Page » Healthcare » Miami-Dade to sue makers of cancer-linked chemicals PFAS 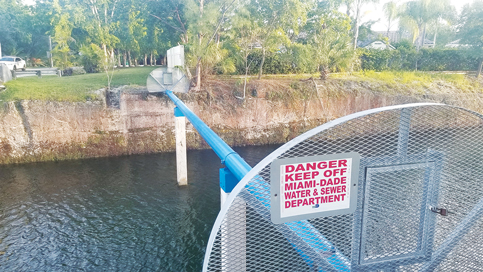 Miami-Dade is suing the makers of cancer-linked chemicals found in the county water supply and has hired a legal team, including the lawyer whose work for those exposed to the chemicals was turned into a Hollywood feature film, to represent it in an ongoing class action.

Commissioners this month voted unanimously to accept County Attorney Abigail Price-Williams’ recommendation and hire a five-law-firm group, collectively called the Levin Team, to handle the “complex litigation and any appeal that may be filed.”

That item, sponsored by Daniella Levine Cava, noted present investigations by the Florida Department of Environmental Protection into how prevalent the chemicals are throughout the state, particularly at fire training facilities, which have used the chemicals for fire-retardant purposes.

The man-made chemical substances, called PFAS for short, were also used in countless commercial products between the 1940s and early 2000s. Though their use in domestic manufacturing has since been widely discontinued, they can still be found in imported goods.

Because they are water-repellant and don’t break down in water or soil, the so-called “forever chemicals” remain at higher-than-acceptable levels in many public water supplies.

The EPA has recommended lifetime health advisory limit of 70 parts per trillion – equal to 70 grains of sand in an Olympic-size swimming pool – for the chemicals, which have been linked to breast, kidney, liver, ovarian, prostate and testicular cancer, as well as non-Hodgkin’s lymphoma.

Non-cancerous human effects linked to PFAS, per the CDC’s Agency for Toxic Substances and Disease Registry, include damage to the liver and immune system, increased cholesterol, higher risk of thyroid disease, decreased fertility in women, pre-eclampsia in pregnant women and low birth weight.

Some subclasses of the substances have been linked to birth defects, delayed development and newborn deaths in lab animals.

Of those six, the county shut down three in Miami Springs. The other three, in Hialeah, remain online, he said, because removing them from production would spread the chemicals to other sources throughout the county.

“We wanted to remain functioning,” he said.

To date, the team has won and settled cases against DuPont and 3M. One member of the team, attorney Robert Biliott, brought forth the first PFAS case in 1999 and obtained verdicts in several cases later consolidated into the original suit.

In an executive summary provided to the county, the Levin Team cited three trails in which Mr. Bilott and others represented some 3,500 individual plaintiffs who contracted diseases linked to PFAS-contaminated drinking water near a DuPont plant in West Virginia. The team ultimately secured favorable verdicts totaling $670.7 million.

Mr. Bilott was portrayed by actor Mark Ruffalo in the 2019 feature film “Dark Waters.” His team’s work was also depicted in the 2018 Netflix documentary “The Devil We Know.”

The team’s litigation against 3M and DuPont includes analyses of more than 6 million pages of documents, dozens of depositions by DuPont and 3M representatives and dozens of expert reports, the summary said.

Those resources, the summary continued, were used by Minnesota’s attorney general in winning punitive damages against 3M totaling $850 million in 2018.

Ms. Price-Williams said she expects the county’s PFAS case to join an ongoing multi-district lawsuit in South Carolina for pretrial consideration and discovery.

“By participating in the PFAS [class action], the county will benefit from collaborative litigation with other similarly situated plaintiffs through, among other things, potential cost savings for experts and discovery and a more streamlined litigation approach,” she wrote.

The county’s contract with the Levin Team provides that the team will receive no fee or reimbursement if it fails to win damages for the county, and “total fees and expenses shall not exceed 20% of the gross recovery.”