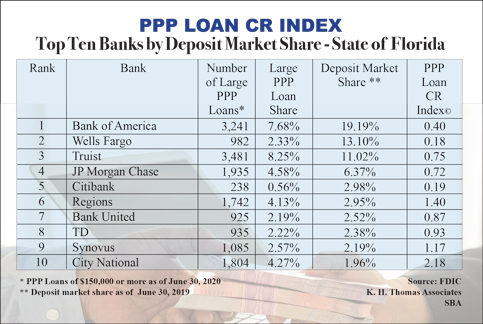 While considerable attention has been paid to which companies and nonprofits received federal funds under the Paycheck Protection Program (PPP) – more than $521 billion authorized in response to the Covid-19 pandemic – a Miami financial analyst has turned his attention to the lenders.

Armed with fresh data from the Small Business Administration (SBA), banking expert Kenneth H. Thomas analyzed and ranked lenders doing business in Florida and concluded that seven of the ten banks with the largest retail operations in the state are not doing a satisfactory job of meeting PPP community credit needs.

He said the idea was not to name and shame the borrowers but rather to analyze the lenders.

In his report, he wrote: “Contrary to most recently published articles focusing on the borrowers of such large loans, our focus in this analysis was on the lenders to determine which banks and nonbanks were most responsive to community credit needs.”

The most common measure of a financial institution’s responsiveness to community credit needs is the simple loan-to-deposit ratio indicating the extent to which an institution is lending back the deposits gathered from a community, according to Dr. Thomas. This is the essence of community reinvestment.

The Paycheck Protection Program was established by the CARES Act, and it is implemented by the Small Business Administration with support from the Department of the Treasury.

According to the SBA, the data disclosure covers 4.9 million loans amounting to $521 billion made under the PPP to businesses and nonprofits, representing nearly three-fourths of the loan dollars approved under this program.

Dr. Thomas wrote: “Since our focus is only on our home state of Florida, we carefully reviewed the 42,207 loans of $150,000 or more made throughout the state. These loans represent 6.4% of all PPP loans, which is consistent with the fact that our state represents 6.5% of the nation’s population (we are the third largest state after California and Texas) and 7.2% of all employer establishments according to the US Department of Commerce.”

He said a PPP Loan CR Index of 1.00 means that a bank has a market share of such PPP loans equal to its market share of deposits, and this indicates that a bank is responding satisfactorily to such loan needs in its community. A high index of 2 or above would represent the most responsive and outstanding banks and lower indexes, certainly below 0.50, would represent the opposite, where improvement was needed.

His report includes a table showing the calculation of the PPP Loan CR Index for the ten banks with the largest deposit market shares in Florida.

All ten banks in the table are based outside of Florida with the exception of BankUnited and City National Bank. All of City National Bank of Florida’s offices are in Florida, and the vast majority of its executive officers and directors are from Florida, although this is not the case with BankUnited, since $8.9 billion – or over one-third of its total of $24.1 billion of deposits – is listed with its offices in New York, according to the FDIC Summary of Deposits.

“The most shocking finding from the … table is that only three banks (City National, Regions, and Synovus) have a PPP Loan CR Index of 1.0 or larger and just one of them, City National, has an index over 2.0,” wrote Dr. Thomas.

“This means that seven of the ten banks with the largest retail operations in Florida are not doing a satisfactory job of meeting PPP community credit needs. This is very disappointing to say the least, considering that Florida is now one of the new ‘hot spots’ for the Coronavirus.

“This latest development means that our businesses, especially the smaller ones, need banks that will be responsive to their ongoing credit needs for some time,” he wrote.

Dr. Thomas said what is even more surprising from the table is the finding that two of the nation’s largest banks operating in Florida have very low PPP Loan CR Indexes, namely .18 for Wells Fargo and .19 for Citibank. These are clearly numbers that need improvement, he said.

“While such a very low index might be expected for a private bank focusing on the affluent like Northern Trust, with a likewise unsatisfactory index of .17, this would not be the case for those two large retail banks,” he wrote.

Dr. Thomas added: ”One of the most surprising findings from this analysis was the fact that several of the regional banks from around the country that have entered Florida via mergers have done a very good job of meeting local credit needs, certainly much better than the giant banks that have long dominated our state.”