Advertisement
The Newspaper for the Future of Miami
Connect with us:
Front Page » Transportation » South Dade bus rapid transit finally hits the runway 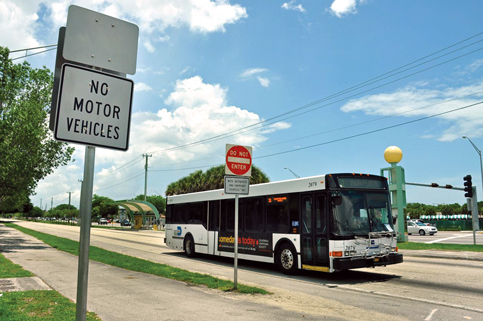 The money is in. A developer is on deck. Two years after decision-makers voted to upgrade Miami-Dade’s longest commuting route with “Gold Standard” bus rapid transit (BRT), it’s close to rolling ahead.

Commissioners Sept. 1 are to finally green light a $300 million overhaul of the 20-mile, two-lane busway linking Kendall and Florida City. It’s the first of six high-traffic routes targeted for new transit in a countywide Smart Plan leaders adopted in 2016.

Funds are in place. Just one piece awaits approval. Commissioners in May accepted $100 million from the state, a match to equal local funds set aside for the route. The US Department of Transportation has committed the last $100 million, which commissioners still must OK.

They also must approve a deal with OHL USA, a subsidiary of Spanish construction and engineering firm OHL, which outlasted two other bidders for the contract.

In addition to the $300 million BRT project – which includes 14 climate-controlled stations with prepaid fares and level boarding similar to rail, as well as traffic signal preemption and crossing arms at 45 intersections – OHL’s contract includes four projects connected to the corridor at a total $68.2 million.

Transportation Director Alice Bravo said the county still plans a new fleet of electric buses for the corridor. A construction, engineering and inspection contract is also due.

“The procurement is complete,” she said, adding that a contract is likely to also face commission approval in September.

Dennis Moss, commissioner for much of South Dade, said that while BRT isn’t his and others’ first choice – Metrorail is – “half a loaf [of bread] is better than no loaf at all.”

Ms. Bravo confirmed project designs allow the corridor to be converted to at-grade rail if the BRT reaches 35,000 daily riders: “Everything we’re doing takes that into account.”