Advertisement
The Newspaper for the Future of Miami
Connect with us:
Front Page » Business & Finance » Scaled down PortMiami cruise terminal deal adds Disney 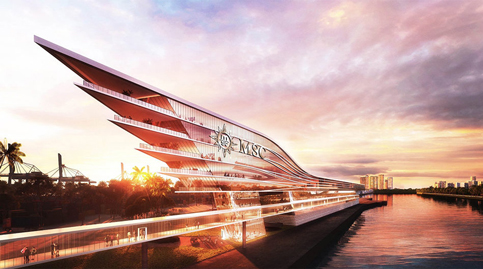 MSC Cruises and Miami-Dade are close to redrawing an agreement that would give the company more time to finance its planned “mega terminal” that now, under the new terms, would also homeport Disney Cruise Line vessels.

The amendment to MSC’s existing 62-year berthing deal, expected to generate $2.03 billion for the county, was one of two changes to long-term cruise terminal contracts that cleared a tourism and ports committee Tuesday. They go to a final vote Sept. 1.

The “novel coronavirus disease [and] suspension of cruising since mid-March … have disrupted the proposed timelines and costs for several planned capital projects at the port,” a memo from Deputy Mayor Jack Osterholt said.

If approved, MSC would have until Feb. 15, 2021 – 107 more days than before – to secure $300 million to build a massive two-terminal complex capable of handling two 7,000-passenger ships at once, as well as parking, ground transportation facilities and MSC’s US headquarters.

MSC has agreed to share its space with Disney, which in 2018 signed a memorandum of understanding for a new cruise terminal on PortMiami’s south side.

The joint operations there, Mr. Osterholt wrote, would save the county money it otherwise would have spent building the new Disney terminal and related projects.

In a brief statement Tuesday, MSC President Rick Sasso reiterated his company’s commitment to having the “Cruise Capital of the World” as its stateside base of operations despite hardships from the pandemic.

“Setting new timelines is part of the new normal, and all of us have an opportunity to seek new opportunities in this adversity,” he said. “That’s what we’re doing today.”

Other parts of the deal, which PortMiami Director Juan Kuryla last year called “the longest-term deal we’re aware of in the history of a port and a cruise line,” could also change.

As it stands, MSC is set to pay Miami-Dade $15.2 million rent starting in 2023, with payments increasing 1.5% a year for 20 years, then 3% yearly through 2063 and at a price index calculation for almost another two decades thereafter.

“Further amendments [are] anticipated in due course,” Mr. Osterholt wrote.

Miami-Dade and Virgin Voyages now also plan to downsize a 30-year berthing and operations deal signed in September that included building a new Terminal V. If the company and county were to agree to two renewal options, the county expected to receive $1.02 billion revenue.

Both parties are now “collaborating to identify specific elements of the project that can be modified to realize cost savings without impacting [its] overall caliber,” Mr. Osterholt wrote, adding that the county “has already begun cost-reduction negotiations with [construction contractor] Suffolk.”

Under the new agreement, the county would cover development costs over $179 million that aren’t the result of changes Virgin sought.

They will also “revisit other terms” related to minimum annual guarantees and incentive payments, Mr. Osterholt wrote. If the two sides agree, commissioners will have an item to approve by Dec. 10.

Mr. Kuryla confirmed with Miami Today in May that deals with other cruise partners, including Carnival and Norwegian Cruise Line, which also signed new agreements with the port last year, may also change.

“We’re working hand-in-hand with them, as we always do,” he said, “to come up with solutions to these challenges.”