Advertisement
The Newspaper for the Future of Miami
Connect with us:
Front Page » Healthcare » Miami-Dade has spent only sliver of its coronavirus funds

Miami-Dade has spent only sliver of its coronavirus funds 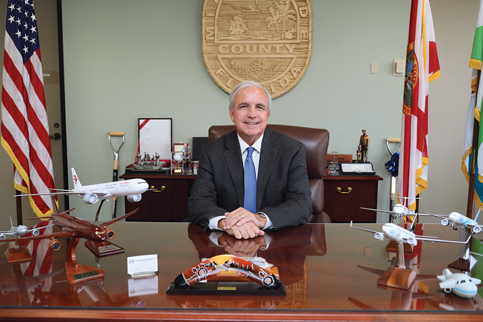 Miami-Dade spent nearly $153 million through June 30 on coronavirus-related programs, according to Deputy Mayor Ed Marquez, who says the county has well over six times that amount to spend this year.

How much of that money will go to the 34 municipalities here remains to be seen, however.

The county also can apply for FEMA reimbursements of “no set dollar amount” until Sept. 23, Mr. Marquez explained, although that deadline could be extended.

“We’re estimating lost revenues between this fiscal year and next fiscal year totaling around $267 million, so we’re going to be very diligent about applying our eligible Covid-19-related expenses to these funding sources,” he said. “We’re going to push the envelope in that regard, because we do need to make up for lost revenues throughout our operating departments.”

Of Miami-Dade’s specific federal funding set-asides, $474 million is from the Coronavirus Relief Fund and is already “sitting in our bank account earning a little of interest,” he said. It must all be spent or returned by Dec. 30.

That money, as well as roughly $467 million from other funding sources, has to go toward supporting existing public and private operations and public safety here. None can be spent to build or expand.

“Every grant dollar that we receive has strings attached to it,” Mr. Marquez said. “All these grant dollars are, one way or another, connected to the financial impacts this community is having because of this pandemic situation.”

Federal monies either already distributed or earmarked for Miami-Dade include:

■$474 million from the Coronavirus Relief Fund.

■$222.5 million from the Federal Transit Administration.

■$6.6 million from the Head Start for Summer Programs.

■$3.5 million from the Assistance to Firefighters Grant Program.

Based on population, Florida has gotten $8.3 billion through the Coronavirus Relief Fund, part of the $2 trillion CARES Act that Congress approved. The state has kept 55% of that allocation while distributing funds to counties, also based on population. Miami-Dade, the largest county by that metric, got $474 million.

Cities here, which cannot receive direct aid through the Coronavirus Relief Fund, encompass more than half the county population. Under Mr. Marquez’s formula, they’d receive just 29% of the funds. Hialeah would get $20.7 million. Miami Beach would get $7.9 million.

The county’s larger cut reflects countywide expenditures that cross municipal lines, he said, adding that cities should be “actively seeking” their own FEMA reimbursements for public health and safety expenditures.

“Our police officers are patrolling beaches. We have our communication department answering calls from the entire public. We have been distributing meals countywide,” he said. “So, automatically, we want to take 50% right off the top. This is less than what the state retained when it disbursed monies to the county.”

The $474 million from the relief fund breaks down this way:

■$70 million in grants, to be distributed over three phases, for local businesses.

■$70 million in reserves for the “next wave” of the virus here.

■$45 million for operating costs through Dec. 30

■$25 million for the county Revolving Loan Fund for Small Businesses.

■$23 million for operations through June 30.

Because the county will distribute the grants to municipalities, the county – not the cities – is responsible for securing all necessary proof that every dollar was spent for approved purposes.