Advertisement
The Newspaper for the Future of Miami
Connect with us:
Front Page » Communities » Long-awaited Underline sets opening date this fall 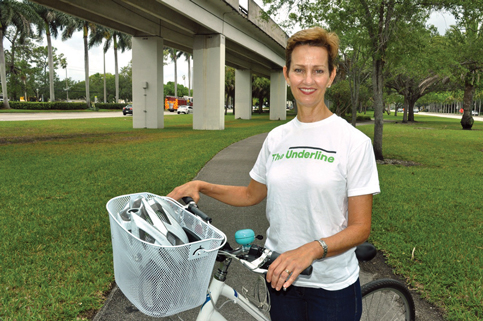 The Underline was always an ambitious concept, a $120 million 10-mile linear park that will weave through several municipalities, invigorating the space beneath the Metrorail.

Now the Underline is preparing for another bold move: opening during a pandemic.

Meg Daly, president and CEO of Friends of the Underline, shared at a recent Downtown Development Authority committee meeting that the first phase of the park, a half-mile stretch known as the Brickell Backyard, has a projected opening day of Oct. 1.

“We don’t know how long the Covid situation is going to go on,” she said during the presentation. “I think we’ve gotten this validated that we are the only park of our scope in the country that’s opening during a pandemic.”

But running a park during Covid-19 will require extra dollars, with a need for additional sanitation and hygiene measures and round-the-clock security, an ask of the county, Ms. Daly said.

“We are talking to our counterparts around the nation, and what we’re hearing is that we should be budgeting an additional 20% to address the safety and sanitization needs for the pandemic,” Patrice Gillespie Smith, chief operating officer of the Underline Conservancy, which handles management, operations and programming, told Miami Today.

Accounting for that 20% bump will translate to an additional $120,000 needed for the conservancy for the remainder of this year, having originally budgeted $600,000 for 2020.

During the meeting, Ms. Daly requested $90,000 from the Downtown Development Authority.

The High Line, a 1.45-mile linear park in New York City built on a former elevated railway line, reopened this week. With the pandemic, the park has instituted timed-entry passes, reduced operating hours, and scaled back entry to the park to one location, with park-goers allowed to travel only northward.

In Miami, the county reopened parks at the end of April after they were closed for over a month. The county beefed up its staffing and enforcement to ensure park-goers were adhering to social distancing.

The Underline is both a transportation and recreation project. Unlike the 25-foot-wide High Line, the Underline is 100 feet wide. With dedicated paths going opposite directions, there’s ample room for social distancing, Ms. Daly told Miami Today.

But the park aspect is the trickier part. The Underline, which is on county-owned land, must adhere to the same rules that apply to other parks.

Much of the Underline’s planned free programming, which promotes focus areas such as health and wellness, arts and culture, and education, will be switched over to the Underline website.

Ms. Daly said the Underline Conservancy will be contemplating how to manage amenities such as the 50-foot communal dining table, which could require designated seating spaces.

“A lot’s going to happen between now and when we open. We’re planning for what we know, and we also have to plan for what we don’t know,” she said.

Ms. Daly, however, noted during her presentation that Covid-19 has highlighted the need for great public spaces. She shared numbers of a recent survey by the Underline, in which 80% of nearly 500 respondents said they have been walking or biking more since the pandemic took hold. The Underline will serve about 85,000 residents in the downtown area.

Brickell Backyard, spanning from the Miami River to Southwest 13th Street, will feature several amenities, such as a sound stage, dog-friendly areas, butterfly gardens, a basketball court and more.

Originally a project that was going to be completed over nine phases, The Underline is now projected to be finished in three phases by 2025, Ms. Daly said. Brickell Backyard and a stretch by the Douglas Road Station are in construction.

The second phase, which runs from Southwest 13th Street to Southwest 19th Avenue, is in procurement. The remaining phases, running from North Coconut Grove to Dadeland, will be in procurement spring 2021, after the US Department of Transportation awarded the Underline a $22.3 million grant toward the design and construction of enhancements of the project.

When asked by Miami Today what it feels to have the project open during the pandemic, Ms. Daly said, “I think we’re at the right place at the right time. Hopefully, people feel safer outdoors, and we want to be there for them.”