Advertisement
The Newspaper for the Future of Miami
Connect with us:
Front Page » Top Stories » Teens around globe translating lessons for Miami kids 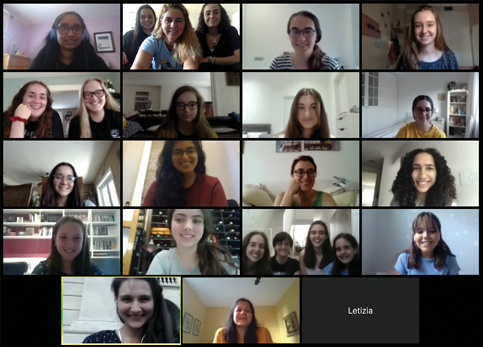 When the coronavirus pandemic prompted Miami-Dade Public Schools to close in favor of online classes and testing, faculty and students alike had to adapt to a different way of teaching and learning.

To help schools reach as many students as possible, the Global Co-Creation Lab in Miami (GCL) has enlisted the aid of teenage girls from around the globe to translate schoolwork and lessons into languages not previously offered.

“Miami-Dade Public Schools connected me to the best students, which are girls aged 12 to 18 who are extraordinary – good in math, engineering, athletics, music – and want to help their communities,” said Dr. Mercedes Balcells-Camps, GCL program director.

In addition to English and Spanish, the teens from Miami, Boston, Barcelona, Paris and Sao Paolo, among other locales, translated materials into Russian, Portuguese, Creole, Basque, Catalan, Galego and Italian. They’re now adding Mandarin and Polish.

So far, the “women’s initiative” has developed 14 videos and webinars, as well as scripts and homework on a variety of subjects that the school system has streamed online, Dr. Balcells-Camp said.

To ensure they are free of errors, she said, adult volunteers who are fluent in each language proofread the translations.

“Our group has the opportunity to inspire a love for STEAM in children who may not have the opportunity to prior,” wrote Narah, a 17-year-old student from Miami, in a testimonial provided by GCL. “Ultimately, our group is paving a path that is one step closer for the next young mind to be inspired by the true genius of science, [and] I am so thankful to be part of that.”

Some of the young women, like Lidete, a 15-year-old from Bilbao, Spain, look at their work as both a way to expand Miami’s educational reach and as an opportunity for her and her peers.

“It’s a good way to [meet] new people from other places and if we do it, we learn English and new things,” she wrote. “In the future this will help us to get a good job, and we will be able to travel around the world. Also … we have fun.”

A nonprofit awaiting its 501(c)3 designation from the state, GCL began late last year through a partnership between Miami-Dade County and the Massachusetts Institute of Technology’s Institute for Medical Engineering and Science.

GCL launched with a $250,000 set-aside in the county budget by Mayor Carlos Giménez, plus a $1 million earmark to fund the lab through 2021.

The lab’s collaboration with Miami-Dade Public Schools started earlier this year, before Covid-19, through a program in which MIT students served as “co-teachers” at the Henry S. West Laboratory School, a K-8 magnet on the University of Miami campus in Coral Gables.

Dr. Balcells-Camps said the goal of the co-teaching program, which was to expand to at least one more school here until school closures delayed matters, is to encourage student interest in STEAM subjects and careers.

Superintendent Alberto Carvalho called the program a “tremendous opportunity,” adding that he hoped to expand it “to further enhance the learning experience for our future leaders.”

Leland Salomon, deputy director of the county Department of Regulatory and Economic Resources, told Miami Today that GCL’s broad efforts since the coronavirus hit demonstrated the group’s dedication, and its many projects show great promise.

“They’ve worked with the school board, created programs with artificial intelligence and medical perspectives from what they’re working on out of Boston as well as what they’d like to continue here,” he said. “Thank God we have the Global Co-Creation Lab and our relationship with MIT, because the people that are working on this, from MIT’s perspective, are phenomenal.”