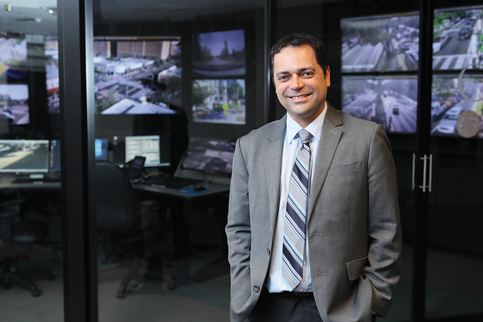 Coral Gables hopes to unveil within three months the first pilot of an engineered pole concept that consolidates smart city technologies such as 5G antennas, traffic cameras and WiFi hotspots into a single apparatus.

The effort, Coral Gables Chief Innovation Officer Raimundo Rodulfo told Miami Today, is part of a larger plan to create an aesthetically pleasing prototype for 5G and smart city poles in Coral Gables in conjunction with technology firm Ekin and Italian design firm Pininfarina. The purpose, he continued, is to develop a set of industrial design standards that the city can “adopt and reuse.”

The city, Mr. Rodulfo said, is facing permit requests from major telecommunications carriers looking to roll out 5G poles. The pilot project, he said, will provide Coral Gables with a concrete design standard that ensures new installations will not hamper the city’s aesthetic character. The end product will be a prototype of a 5G pole with internal wiring that combines aspects of design with the functional ability to house multiple forms of technology.

“By working with Pininfarina, we (handle) the aesthetics and industrial design and beautification,” he said. “And by working with Ekin, we are looking at consolidating all that (smart city) technology into one pole.”

Since Coral Gables is already home to smart city technologies such as WiFi routers, traffic cameras, and security devices that all require their own “housing,” one goal of the pilot project is to consolidate these technologies into a single device, allowing the city to cut down on visible poles. For this aspect of the project, Mr. Rodulfo said, the city turned to Ekin.

Within three months, he continued, the first pilot of the prototype’s technology is set to roll out. A timeline is to come for the project’s aesthetic design plans, which fall under Pinanfarina’s expertise, and Mr. Rodulfo said the city is in the process of reestablishing communication with the Italian firm after temporarily halting conversations to focus on coronavirus concerns.

While design standards aren’t final, Mr. Rodulfo said one factor the city is looking for is completely internal wiring. City Attorney Miriam Ramos previously told Miami Today that the final design would be “consistent in proportion and detail with the Coral Gables Mediterranean standards, including a forest green color finish, metal materials, a fluted shaft and ornamental tops and bases, which will feature the words, Coral Gables, Florida.” The city, Miami Today previously reported, will pay around $150,000 for the prototype.