Advertisement
The Newspaper for the Future of Miami
Connect with us:
Front Page » Education » Palmer Trinity lays out three scenarios to open 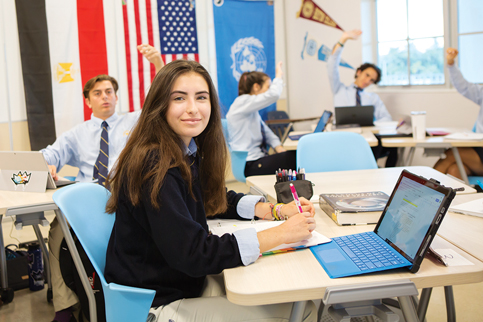 As the new school year approaches, Miami-Dade County private schools are putting in place guidelines that will ensure the safety and wellness of students and faculty.

Considering all possibilities, Palmer Trinity School has established a strategy to reopen Aug. 19. The private Episcopal school has created three planned scenarios to seek a safe start of the school year.

“Back in spring, we created a task force group to see the possibilities of how the school will look like when we reopen,” said Patrick Roberts, head of school for Palmer Trinity. “Through many conversations and a lot of sharing, I have designed three scenarios that are ready to be put in use.”

The first scenario, which is the ideal one, is to bring everyone safely back to the campus, which will create a lot of work, supervision and investment, Mr. Roberts said. “To be honest, as of right now, it might not happen, but it is our goal.”

To make sure all faculty and students are safe, the second option would be a hybrid scenario, which most schools are leaning toward using. The school would be divided into two shifts and the student population split in half. Instead of having 760 students at the campus, only half would attend in person and the rest would be homeschooled, he said.

“This way everyone is attending school every day. Classrooms have been modified for any student who doesn’t feel safe yet and can still interact and engage from home,” Mr. Roberts explained.

The third scenario would be fully online, which would occur under a stay-at-home-order situation.

“We are trying to communicate with our families to sit tight and that we will never put students and faculty in a situation they feel unsafe,” said Mr. Roberts, who also serves on the board of directors for the Florida Council of Independent Schools.

Being advised by outside health officials and its board of trustees, Palmer Trinity School expects to stick to its initial reopening date and plans, with a much clearer sense of exactly how it will be implemented at the start of August.

“We’ve been pretty certain that we are going to start the school year without any delays,” Mr. Roberts said, “but we have to see how Miami will be like during that time and just be ready to start in any way, shape or form.”