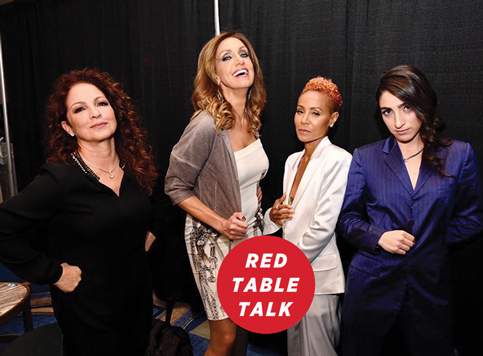 Facebook Watch’s Red Table Talk Productions Inc. is heading to Miami with a new franchise second series featuring the Estefans and is seeking a $50,000 grant from the county’s film incentive program.

The round table talk show-based series was made popular by executive producer Jada Pinkett Smith and parent company Westbrook Studios. Miami’s iconic music family, the Estefans, is next to bring the spotlight back to South Florida, with plans to bring economic development and local employment opportunities through Miami-Dade’s local television, film and entertainment production incentive program.

The county commission was to vote on the funding this week. Once approved, the grant will be disbursed only after the project is completed and proof that all requirements are satisfied has been submitted, said Sandy Lighterman, the county’s film and entertainment commissioner.

“The show applied back in February, but it took this long to get it on the schedule due to the pandemic,” she said.

The show’s filming crew has plans to start production in late August or early September, with eight days of shooting. The daily series formatted show is to hire 30 Miami-Dade residents for the duration of production, which will be done 100% locally. Red Table Talk Productions has a budget of $5.56 million, with about $1 million expected to be spent locally, according to the talk show’s film incentive grant application to the county.

As its main mission to promote Miami-Dade as a top production destination, the local television, film and digital entertainment production incentive program was approved and introduced in July 2017, with the intent to help support individual film and entertainment projects that will benefit the industry’s workforce and boost the local economy. Requirements include spending a minimum of $500,000 locally, 70% of the project being film in the county, and utilizing 70% local vendors and businesses.

“The project can take a few months or even longer because of the health and safety restrictions that are out on production crews,” Ms. Lighterman said.

Red Table Talk: The Estefans show will star Gloria Estefan, Lili Estefan and Emily Estefan. Representing three generations of women, they are to talk about social and personal issues with occasional celebrity guests and experts.

The Estefan family, beginning with husband and wife Emilio and Gloria, have strong roots in Miami and have become local icons, giving back to the community through the Gloria Estefan Foundation and Estefan Enterprises Inc. They have also invested their Latin flavors in the hospitality and tourism industry, owning six restaurants and two hotels throughout Miami-Dade, according to Gloria Estefan’s official website.

With a production company of such caliber and with a huge worldwide following, the talk show is going to attract a lot of promotion and marketing for Miami’s Latin culture, which is one of the main goals of the film incentive program, Ms. Lighterman said.

The series will also focus conversations on issues faced in Miami-Dade County.

“The show gets right to the heart of the matter and topics people don’t normally talk about,” Ms. Lighterman said. “I think a lot of people are going to want to hear what the Estefans have to say.”