Advertisement
The Newspaper for the Future of Miami
Connect with us:
Front Page » Business & Finance » Free event could oust 37-year-old Santa’s Enchanted Forest 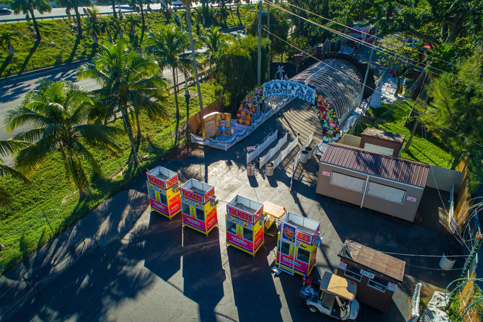 A free holiday event would replace Santa’s Enchanted Forest, whose lease expired after 37 years in Miami-Dade’s Tropical Park, if the county commission follows a path that Mayor Carlos Giménez has laid out.

The mayor’s four-page report, ready for this week’s commission meeting, lists multiple concerns about Santa’s but offers no firm details about what would replace it or how it would be funded “if Covid-19 circumstances change and a holiday-themed event is possible.”

“I have directed Miami-Dade County Parks, Recreation and Open Spaces to work on a family-oriented event that is free and open to the public to enjoy,” the mayor wrote. “It is more important than ever to be sure that families in our community have free and safe opportunities for recreation and celebration in light of the health and economic financial crisis caused by the pandemic.”

Santa’s Enchanted Forest wants to return, but the mayor said neither he nor district Commissioner Javier Souto think it is in the county’s best interest “to recommend a non-competitive bid waiver.”

He cited “numerous reported concerns to the Miami-Dade Police Department about the management of the annual event,” an entry fee that was “prohibitively high” at $27.10 for children and seniors and $35.51 for adults plus added costs for rides and food, and “a disturbing track record on non-compliance with existing rules and requirements.”

He also said social distancing on rides and disinfecting them between uses could be difficult, posing health hazards. He wrote the report before the latest spike in Covid-19 cases.

Commissioners on May 5 ordered the mayor to renegotiate with Santa’s after a January plan that would have directed him to seek bids for other uses of the 16 acres that Santa’s leased for $304,331 in 2019, less than half of the $620,000 that an appraisal said was market value. “The amount now being offered in Santa’s correspondence is $425,000, still significantly less than market value,” Mr. Giménez wrote.

“Nonetheless,” he continued, “this decision not to recommend a bid waiver is not a result of this inadequate rental fee; the decision is based primarily on our commitment to providing a free, safe and higher quality holiday event for our community’s families.”

In an April request for a one-year lease extension, Santa’s President Steven J. Shechtman wrote to commission Chairwoman Audrey Edmonson that the attraction offered to increase payments, including $425,000 rent plus $565,000 for police, fire and building fees, up from $490,000 last year, as well as 52,000 free admissions, up from 42,000 last year.

“We will even guarantee the 2020 rent payment even if the event cannot be held or is diminished due to Covid-19 large gathering guidelines,” Mr. Shechtman wrote. “If Santas can’t operate as normal, then Santas will guarantee an additional $425,000 rent for the following year.” He said a Covid-19 expert was retained to insure that the event goes beyond established safety measures.