Advertisement
The Newspaper for the Future of Miami
Connect with us:
Front Page » Top Stories » Million Trees plans pruned 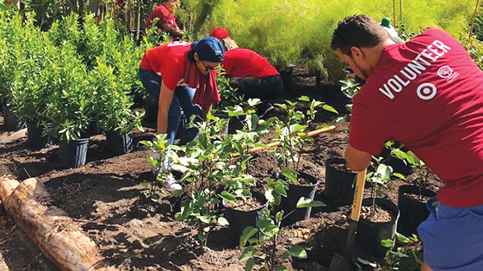 Million Trees Miami, an initiative funded by Miami-Dade County, has set its sights on establishing a 30% tree canopy in the county through tree giveaways, plantings, grants and special programs directed at shading bus stops and playgrounds.

In 2016, the Miami-Dade County Urban Tree Canopy Assessment placed the county’s coverage at 19.9%. However, Gabriela Lopez, community image director for Neat Streets Miami, which oversees Million Trees, said up to 30% of this canopy may have been lost over the past four years due to storms such as Hurricane Irma and Hurricane Dorian.

The organization’s original goal, she said, was to plant one million trees in Miami Dade; roughly the number needed to reach the 30% canopy based on 2016 estimates. Now, the goal is to plant as many trees as possible while the county works to update the assessment via satellite imaging and reassess, a project that Ms. Lopez said should be completed by next spring.

This percentage, she continued, “is the national standard for a healthy urban environment.” In addition to providing aesthetic benefits, Ms. Lopez said studies have shown that trees provide economic perks.

In fact, well-placed trees can raise property values, increase the time and money pedestrians spend at shopping centers, and help residents and businesses save up to 56% on annual air-conditioning costs, according to the US Department of Agriculture Forest Service.

Dr. Erin Marcus, a professor of clinical medicine at the University of Miami, she believes location inequality could be negatively affecting the health of some of her patients. “Part of (a healthy lifestyle) is being able to walk for activity,” she said. “When it’s hot and there’s no shade it’s hard to do that. There’s a lot of evidence that having green neighborhoods improves health.”

Indeed, she pointed to a 2016 study of 249,405 Medicare beneficiaries over the age of 64 in Miami which found that “greenness or vegetative presence may be effective in promoting health in older populations, particularly in poor neighborhoods, possibly due to increased time outdoors, physical activity, or stress mitigation,” and was correlated with reduced risk of diabetes, hypertension and high cholesterol.

Dr. Marcus acknowledged that other factors influenced these findings as well, but said she still believes everyone should have access to a walkable neighborhood, especially at a time when residents may not want or be able to attend a gym

“In Miami-Dade,” Ms. Lopez previously told Miami Today, “it could be up to 30 degrees cooler under a tree.” With this in mind, Million Trees has “Growing Green Bus Stops” and “Growing Green Playgrounds” programs, which aim to shade these locations to protect children and riders. High temperatures, she said, can make playground equipment unsafe and cause bus riders to cross dangerously busy streets to find shelter near unshaded stops.

Additionally, Million Trees Miami distributes trees to residents through tree giveaways often hosted by private companies that allow residents to pick out a tree that is suitable for their environment and learn how to care for it from a master gardener.

“One of the largest available pieces of green space that we have are residents’ own backyards,” said Ms. Lopez, “so we want to make it as easy and convenient and as possible for them to plant, and to cultivate their trees.” Between September 2019 and September 2019, she said, Million Trees gave away 4,095 trees.

Despite the fact that Million Trees receives government funding, Ms. Lopez said it functions much like a nonprofit, partnering with national or local charities and sponsors to further its mission. “We work with national partners (like Arbor Day Foundation, American Forests and One Tree Planted) to connect us with sponsors who want to invest in Miami-Dade County,” she said.

Matt Hill, the creator and “chief environmental evangelist” of One Tree Planted, said his organization worked to get local donors in touch with Million Trees, which then facilitated the process of choosing an appropriate location and type of tree for the planting.

The height and species of trees given away or planted depends on a variety of factors, including local laws, the environmental makeup of the community, and the type of soil it will be planted in, said Ms. Lopez.

For giveaways, she said, three-gallon trees are used. These trees are one to five feet tall depending on species and are contained in a three-gallon bucket. For planting events, trees range from 10-14 feet.

Between September 2018 and 2019, Ms. Lopez said, Million Trees planted 1,446 trees in the county, not including those planted by homeowners or individual municipalities. Additionally, she said, over 1,000 trees were planted through Million Trees’ Street Tree Matching Grant, which is an annual program that awards municipalities, agencies, non-profits, foundations, or community groups matching funds to plant trees, ideally in areas where they will have a high impact.