Advertisement
The Newspaper for the Future of Miami
Connect with us:
Front Page » Real Estate » Bid to slow soccer stadium on Melreese golf course stymied 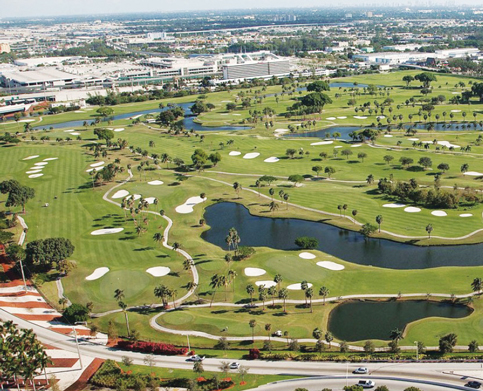 A billion-dollar development to replace the golf course in city-owned Melreese Park keeps chugging ahead, but a zoning application for it met opposition from a commissioner who said Miami is getting ahead of itself and not following the process.

Manolo Reyes, an established foe of the development, named Miami Freedom Park, presented an item last week that called for the city and its outside counsel to halt all zoning applications related to the project until the commission has approved all lease agreements. His legislation died on the dais, with no other backing.

“I want to know why we’re going for an SAP [Special Area Plan] or a zoning change when we don’t have a contract, we don’t have any leases, and we have not agreed on anything,” he said.

City Attorney Victoria Mendez said the city and Miami Freedom Park were originally co-applicants, but to comply with city code, the city is now the sole applicant.

City Manager Art Noriega said the city began the Special Area Plan application with the understanding that the zoning items would not go to the commission before the lease agreement.

“My concern is it hasn’t been done before, that we shouldn’t start doing it, and we shouldn’t set precedents like that,” Mr. Reyes said.

The proposed 131-acre development at Melreese Park just east of Miami International Airport is to feature a 25,000-seat stadium for Major League Soccer team Inter Miami CF, 1 million square feet of office, retail and commercial space and a 58-acre public park. In a referendum, 60% of voters approved the city negotiating the lease with the developer.

Inter Miami announced the developer was moving ahead with the Special Area Plan, a provision in city zoning that allows more flexibility for projects larger than 9 acres.

Mr. Reyes said the city was acting as if the project already had approval. When his item died for lack of a second, he laughingly admitted he hadn’t expected anyone else to vote for it.

“I wasn’t expecting one, but my point is clear, and I wanted people to know that processes are followed when there are certain people,” he said, “but when we get people that they’re very influential and they have a lot of money to spread out and all of that, then we bend over backwards in order to accommodate them, and that’s not the way this government should be run.”

Mr. Reyes’ opposition to Miami Freedom Park is well-known. At his order, the commission held a special November meeting so it could vote on a lease between Miami Freedom Park and the city. He wanted the vote before then-commissioner and project critic Wifredo “Willy” Gort’s term ended. However, negotiations between the city and Miami Freedom Park weren’t completed.

Earlier this year, Mr. Reyes failed to gain legislation that would strengthen the city’s policy of no net loss of park space to require that lost parkland be replaced with equal sized parkland in the city, unless overturned by unanimous vote.

During the discussion, another commissioner said the deal was not a certainty. Ken Russell said he wasn’t satisfied with the amount of green space the developer claims must be replaced in order to meet the no-net loss policy.

“I can tell you right now,” Mr. Russell said, “20 acres is not enough, and that’s what’s being applied for in terms of replacing the green space that’s there right now.”