Advertisement
The Newspaper for the Future of Miami
Connect with us:
Front Page » Profile » Lenore Rodicio: Overseeing the quality of Miami Dade College education 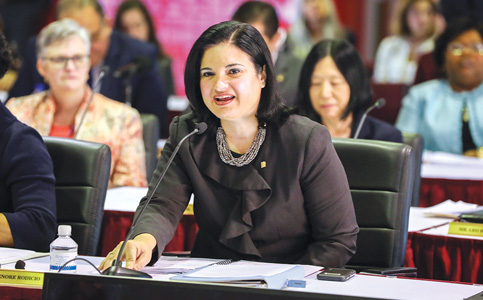 As she tells it, Dr. Lenore Rodicio found her workplace of more than 18 years by happenstance. A trained chemist, she returned to her hometown of Miami after completing her doctoral degree to conduct research at the University of Miami.

The end of those activities coincided with the birth of her second child. After weighing options that would allow her to care for her newborn, she sought an adjunct professor position at Miami Dade College (MDC), the largest school in the Florida College System and the second-largest college or university in the nation.

“It only took a couple weeks of teaching there before I fell in love with the institution, its mission and, mostly, its students – a unique population of individuals with incredibly varied backgrounds coming here with, in some cases, real challenges in both their personal and professional lives and in the academic needs they had,” she said. “To see the transformation that occurred in them as they went through courses and with each success they had, I realized there was something very special at this institution and felt drawn to it in a way I hadn’t to anything before. When a full-time faculty position became available, I applied and have been there ever since.”

Between May 2002 and now, Dr. Rodicio steadily rose through MDC’s ranks, from associate professor, chairperson of natural and social sciences, dean of academic affairs and executive director of student success and completion to vice president of student achievement, provost of academic and student affairs and, most recently, executive vice president and provost of the college at large.

Dr. Rodicio, MDC’s top education official, is now a finalist for the college’s presidency and the only candidate still from within the institution. While the selection process for the position is on hold due to the coronavirus pandemic, she said, she remains committed to earning the role.