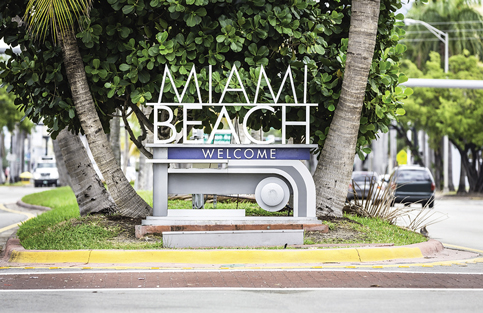 The City of Miami Beach has held its first budget meeting for the next fiscal year and the financial outlook is dismal – and not just because of Covid-19.

Nearly all commissioners and the mayor participated in the meeting last week, in which Chief Financial Officer John Woodruff walked the elected officials through the outlook for the 2021 fiscal year. While the impact of the current pandemic has led to a significant financial hit for the city, another quandary for Miami Beach is the slow increase in property values, which account for 54% of the general fund revenue.

The projected increase in preliminary property values for the city is 3.5%, according to the estimated taxable values as of June 1 provided by the county’s Property Appraiser’s Office. The city lags behind the entire county’s projected increase for the next year of 4.6%.

Last year, existing property values increased 2.3%. That doesn’t bode well for fiscal 2022 either, Mr. Woodruff said. “This concerns me given that 2022 could easily be just as bad or worse if we haven’t hit bottom yet.”

He and elected officials were cautious about jumping to conclusions on why property values were not increasing fast enough for the city to break even with inflation. Bal Harbour, Aventura, North Bay Village, Key Biscayne and Surfside – all coastal communities – were expected to see property values decrease.

Mr. Woodruff said the city had engaged a consultant to get a solid explanation why the property value in Miami Beach saw little growth. That report should be ready by the next budget meeting July 17.

Mayor Dan Gelber said Miami Beach had the only increase in property values among the six coastal communities, which could be related to Miami Beach’s ongoing resiliency efforts.

“Something started happening that all of the coastal communities are having a downward trajectory,” the mayor said. “and many of the interior communities, maybe ones that are changing at this time, seem to be, some of them, very significantly going in the other direction.”

Mr. Woodruff said it could be something like there being too many high-end condominiums by the water, but he said he doesn’t want to assume.

Mr. Woodruff said each percentage point in property value equates to about $2 million in revenue for the city. Without taking into account the impact of Covid-19 on the city’s revenues, there’s a general fund budget gap of $6 million for fiscal 2021.

Factoring in Covid-19, the city is looking at an additional $7.8 million decrease in revenues for the general fund, which would result in a budget gap of $13.8 million for the next year.

Because of the city’s significant dependence on tourism dollars, the impact on the resort tax fund will be sizable. While hard to project, the city is looking at a likely revenue loss of $22 million, which is partly offset by a $3.7 million reduction in the transfer to the general fund.

Mr. Woodruff said the city worked with others, including the Greater Miami Convention & Visitors Bureau, to project the potential resort tax revenue impact. They think the leisure market will bounce back sooner than predicted, but the rates will be lower for the next three to six months.

That leaves the city with a combined total gap of more than $32 million.

Commissioners were receptive to using $15 million from the city’s reserve for the upcoming fiscal year, having used $5 million already for this fiscal year. That would leave the city with $60 million in its reserve.

On July 17, the city is to look at balancing the budget. Potential cuts to city services include trolleys and park rangers. The city has already had to furlough employees to grapple with the impact of Covid-19.