Advertisement
The Newspaper for the Future of Miami
Connect with us:
Front Page » Top Stories » As freight demand grows, truck parking shortage serious 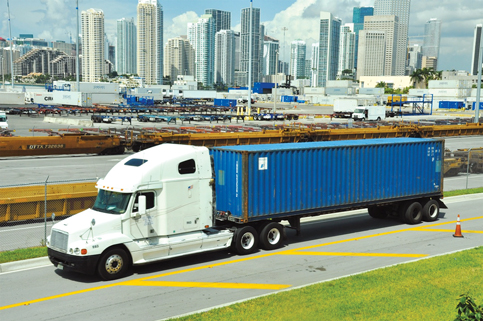 Around this time last year, when Amazon outpaced Walmart as the world’s largest retailer on Forbes’ annual Global 2000 list, it marked a sea change in commerce. For the first time in human history, a retail company that – aside from its Whole Foods supermarket chains – only sells its products online topped every brick-and-mortar seller on the planet.

Now in the wake of Covid-19, many businesses are having to adopt that model regardless of whether or not they want to. The growing demand for freight has transportation decisionmakers here, in Tallahassee and Washington, DC, scrambling to shore up a “critical shortage” of parking for freight trucks in Miami-Dade, according to Aileen Boucl©, executive director of the county Transportation Planning Organization (TPO).

“It’s something we just discussed with the Federal Highway Administration,” she told Miami Today. “We’re an end-of-the-line user, as well as the beginning point of freight starting at the port, airport and rail system, and we need to make sure we’re adequately prioritizing investments to keep that freight network optimized and continuing toward this increased demand going forward.”

Truck parking, while vital to a freight network, “has often been overlooked,” with facilities “typically [offering only] the bare minimum of space to park,” an update to the county’s freight plan by engineering consultant Marlin said. “Despite the availability of federal funding for truck parking, new regulations and availability of suitable land in urbanized areas have continued to [exacerbate] the issue.”

TPO studies in 2010 and 2012 found that while parking demands for both local and long-haul truck drivers in Miami-Dade exceeded 12,000 spots, just 293 parking spots existed. Closing that gap, Marlin personnel wrote, would require redeveloping more than 1,100 acres.

“In a county with limited undeveloped land, a wide mix of land uses, and high land values, finding appropriate locations to build [truck parking] facilities has proven to be a challenge despite efforts by the TPO, the Miami-Dade Freight Transportation Advisory Committee, and the [Florida Department of Transportation] District 6 to encourage the development of new truck parking locations,” the Marlin report said.

That funding, Marlin personnel wrote, “could be available for use at a location that is selected by the county.”

County and state transportation officials have targeted a 17-acre parcel near the Golden Glades Interchange for a “Truck Travel Center” that, upon completion, will include at least 135 truck parking spaces. Other amenities may include fueling, truck repair, truck washing, truck weighing and dining, shopping, laundry and showering space for drivers, a May 13 presentation to the freight committee shows.

The Florida Department of Transportation expects the project to start in early 2023, end by June 2024 and cost about $24 million, of which $6 million could come by way of a private equity contribution, said Carlos Castro, freight coordinator for the state. The state has yet to issue a bid request for the project.

Mr. Castro said the department expects private sector investment due to how difficult building a facility is for private companies in large metropolitan areas with expensive land. Because the land is public, it cuts otherwise prohibitive costs.

“In a highly urbanized area like Miami-Dade or Broward, [if] you want to develop this type of facility… and have to buy land at $1 million per acre, there’s no way to make it a profitable business, so the department is stepping in,” he said, adding that the department will seek a private operator to run the facility once it’s built. “We have ample suitors for truck parking facilities.”