Advertisement
The Newspaper for the Future of Miami
Connect with us:
Front Page » Opinion » Quest for an airport convention hotel should go on standby

Quest for an airport convention hotel should go on standby

Miami-Dade commissioners who rushed to quickly cut a deal for a new Miami International Airport convention center hotel should have listened to Mayor Carlos Giménez, who assessed today’s world and counseled a go-slow approach.

After seven commissioners had urged a highly expedited selection of a hotel developer on airport land, the mayor said this isn’t the time for haste.

“I really don’t know what the heck an airport hotel should be in a post-Covid world,” the mayor said.

“I’m not that keen on an expedited process. What Covid-19 has taught us is that business is going to be run in a different way,” he said, urging the commission to go slow.

It’s not as though there is any demand now for what the commission envisions as a business hotel for meetings and conventions on airport grounds. Businesses today meet by video remotely, just as commissioners themselves did when they voted to deal very fast for the hotel. There’s every good reason to think that many business meetings will remain remote in the future, if only as a cost-saving measure.

A convention hotel project had been on the drawing board more than a dozen years with no rush. Now, with businesses slashing travel to practically nothing, commissioners have expedited it.

The key is not demand for a fly-in convention center and hotel – today there’s no demand. Demand is commissioners’ hope for the future, a hope we fervently share with them, but certainly not a reality. We should note to be fair that commissioners did vote well before Covid-19 cases started rising again after our opening-up began.

At the May 19 meeting at which commissioners voted 12-0, the theme was to rush so that a deal could be cut before the November election, when five of them must leave office because of term limits and three are running for mayor. By state law, those in the race for mayor must also resign commission seats. 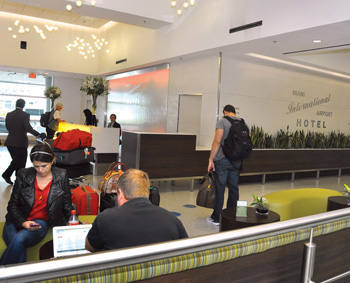 Thus, for most of 13 commissioners this is the last bite at the apple, passing a major project with a private developer before they leave office. It’s amazing how important this deal seems to be just to cement a legacy after, for most of them, many years in office. One commissioner also mentioned a need for construction jobs. We won’t even speculate on another reason.

It seemed to have escaped commissioners before voting that the legislation on the table called for dealing with no competitive solicitation with just one company, a year-old firm that had acquired plans for an airport convention hotel from the promoters of a massive Airport City proposal that had crashed a decade ago. 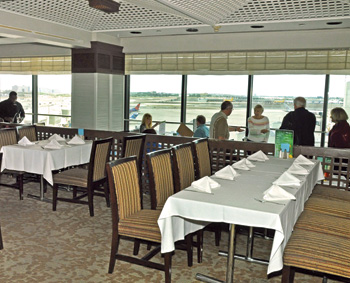 Miami International Airport Hotel’s Top of the Port serves food with a view in 2015.

Suddenly, commissioner after commissioner called for competition, but so expedited that it would be unlikely anyone who didn’t have the earlier hotel plans could win the job. Before a solicitation, one candidate seems a sure winner.

Sponsor Esteban Bovo Jr.’s timetable offered 90 days to get proposals, a month to review them, and a contract through the commission in October or at latest November.

As for the mayor’s concerns that we haven’t yet seen how business will function after the pandemic eases, Mr. Bovo said “the business community is going to be better equipped to tell us what might work or what might not work…. a wise hotelier is probably going to have to take these things into review.”

If it’s a wise hotelier the commission seeks, the county must be far better at picking one than it was in the past.

At the heart of the airport terminal now is a 60-year-old county-owned hotel that has been a headache for government many times over the past 16 years.

The county tried for years to oust the firm running the hotel. The aviation director told commissioners he had completely lost confidence in the operator at the time. The county lost millions in revenues. Fraud was charged against a former hotel official. Commissioner Sally Heyman in 2013 called the hotel substandard.

Today the hotel has a new operator but it’s clearly not a convention and meeting magnet.

The inability of the county to get what it sought at the old hotel should give officials pause about how they could do better at a new one, but clearly they want a new one.

Ms. Heyman noted before the vote that when she flies to meetings in Tampa they’re usually on airport grounds and she never leaves the hotel during her visit.

That’s no goal for our visitor-oriented community to aspire to. Such visits really benefit only the airport and the hotel and don’t touch the rest of a community that is founded on its visitor influx to fuel restaurants, stores, local transportation and far more.

The hotel as envisioned would also be expressly tailored to business only.

“The days of family traveling around here and pleasure [travel] are no longer in front of us,” Commissioner Javier Souto said before the vote. “All the latest technology should be employed in helping the clientele that brings the travelers and the big dollars to Miami” – or at least to its airport.

That sounds wonderful, though as the mayor noted, nobody knows the future direction of business travel. He asked “What is going to be the clientele that is going into that hotel?”

In the eyes of Commissioner Jose “Pepe” Diaz, the guests will be business travelers from South and Central America who are going to fly into Miami International Airport for face-to-face meetings and then fly right back home.

If that is indeed the market for which a hotel structure is expressly tailored, you’d think market studies would be in order first rather than just guessing what a post Covid-19 world will look like for Latin America. Look at Brazil, which for years was our biggest travel partner in the region and has just become the second-hardest-hit nation on earth for Covid-19.

If a hotel would accelerate air travel into Miami-Dade, as was always the hope, we’d have a valid reason to go fast, because airlines are all suffering with far fewer passengers and high costs for health protection.

But working like crazy on an unproven hope to have a contract before an election ends the tenure of much of the commission is clearly too fast.

Commission Chairwoman Audrey Edmonson did note that the timing could be terrible to push full speed ahead on an airport convention hotel. If the climate for success doesn’t look right, “then we just don’t go through with it” in the end, she told commissioners before they voted to rush through a procurement process.

The clock is now ticking to choose a hotel developer, though not to seek a hotel operator. The final proposal sent to commissioners might or might not name an operator. If a construction contract is approved before an operator is chosen, what of Mr. Bovo’s call for a wise hotelier to decide when and how to proceed?

All of this is now in the lap of Mr. Giménez, whose go-slow advice was absolutely right. The vision of an airport hotel was attractive a dozen years ago when commissioners killed the Airport City plan. As the mayor correctly asked, why the rush now?