Advertisement
The Newspaper for the Future of Miami
Connect with us:
Front Page » Arts & Culture » Enriched performing arts season still on the table 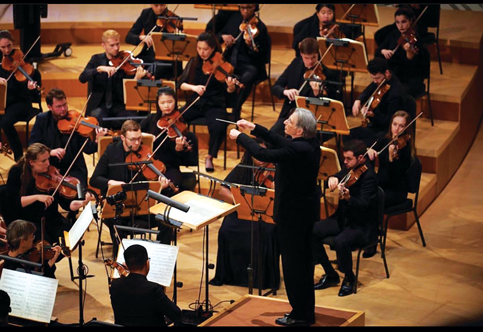 What has become a tradition for South Florida residents and tourist from around the world, Miami’s enriched arts season for 2020-2021 is still on the table hoping to bring new experiences and adventures with possible show dates in October, which is normally around the time most of Miami’s performing arts organizations kick off their seasons.

Even with county and health restrictions applied for safety measures, New World Symphony President and CEO Howard Herring said he sees symphony’s Fellows as part of a live concert experience once again in October, as long as people absorb the rules.

“We have made a map and a sense of how a Wallcast concert will be with social distancing and we will be able to accommodate a significant number of people,” he said. “How soon we can bring people out to a live performance depends on local government and health officials and the comfort level of our audiences… We can’t really predict that.”

At the heart of New World’s near future is the power of digital capturing and distribution, Mr. Herring said of new initiatives that were thought of and utilized during the quarantine. “Our second path is to create vibrant and transformative experience for a global digital [world] of audiences that will be shared across the internet.”

The long-term plan will be a combination of both live and digital symphony concerts, which will increase and reach hundreds of thousands of viewers, including live audiences, he said. “But until we do our own experiments, we won’t really know people’s comfort level.”

With its season already announced for fall, the Miami City Ballet is working hand-in-hand with its theater partners and if necessary, possible shifting of dates to accommodate performing arts centers and tri-county guidelines. The season opens with the world premiere of “Ablaze,” featuring exhilarating new works, running from Oct. 16 to Nov. 11 and followed by one of South Florida’s holiday traditions “George Balanchine’s The Nutcracker,” with scheduled showtimes starting Dec. 11.

One of the ballet’s main focuses is to get dancers back in the studio and get Miami City Ballet School’s five-week long summer school programs back on track starting June 29, said Tania Castroverde Moskalenko, Miami City Ballet’s executive director.

An in-house task force was created to assure all safety and health requirements are being met in every possible way, going beyond what the state and counties require. An environmental, health and safety company will assess the building and report the best ways to sanitize and provide the highest level of safety, Ms. Moskalenko said.

“We have artists coming from other parts of the country and we are responsible for other people’s children. Safety and health are really important to us,” she said.

Even though it’s too early to tell, Florida Grand Opera is being completely transparent and keeping those channels of communication open with its patrons, partnering theater centers and artists whose livelihood depends on theatrical productions, said Susan T. Danis, the opera’s CEO and general director.

“We want to make sure we get it right when we go to the market with a solid decision. A lot of people don’t think anything is going to happening in the fall, but we will start looking around July to see how things are going,” she said. “Depending on what the outcome might be, we are preparing marketing material with different scenarios.”

Florida Grand Opera’s season launches Nov. 14 with “La Traviata,” telling the story of a glamorous Italian woman whose dazzling lifestyle starts to unravel when she falls in love with kind-hearted Alfredo. A two-week intensive summer program called “Live Opera Lab” will also be offered in four separate sessions beginning June 22. The program is geared toward high school and undergraduate college students who are interested in studying classical voice and are working toward pursuing a career in the performing arts.

“We are trying line up a bunch of plans with our studio artists who generally arrive in mid- October and look at ways on how we can feature them and potentially do some smaller productions,” Ms. Danis said. “As soon as we know what things will look like, everyone else will as well.”