Advertisement
The Newspaper for the Future of Miami
Connect with us:
Front Page » Government » New Miami International Airport hotel on the runway 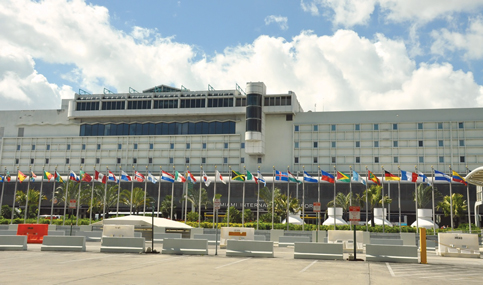 Miami-Dade has launched a process that by November could see a deal for the first new hotel at Miami International Airport (MIA) in 60-plus years take flight, but without the mayor’s endorsement.

Commissioners directed staff to start a three-month bid request process, followed by a 30-day review to conclude in September. The expedited timeline would leave the county with a month to award a contract, likely one of the last major legacies of five commissioners losing seats this year due to term limits.

“The class of ’20 would like to see something done,” said Esteban Bovo Jr., who has led talks of building up to two new hotels as part of a 15-year, $5 billion MIA overhaul that commissioners approved last year.

The directive, which requires all proposals to include convention center, meeting room and trade show space, passed 12-0 May 19. Joe Martinez was absent.

Parmco owns a controlling interest in hotel designs for Airport City, a $512 million MIA development that Miami-Dade planned with Odebrecht Construction Inc., a subsidiary of Brazilian conglomerate Odebrecht, that crashed amid issues over work the parent company did in Cuba, project downsizing and belief that the county could earn more without Odebrecht.

Mr. Lambert’s firm, Lambert Advisory, was part of the 2008 team developing Airport City’s hotel piece, which would have risen east of MIA’s Dolphin Garage, where the new hotel is now to go.

“Setting up [Parmco] allowed us to… take an interest from [Odebrecht] in terms of all the plans, drawings and everything – all the survey work and engineering – that went with it,” Mr. Lambert told Miami Today this week.
Using those old plans, Mr. Bovo said April 20, would accelerate building a new MIA hotel now to supplement the existing one built in 1959.

“Do we have to start from scratch? Can we pick up where we left off?” he asked before telling staff to draft legislation for open bid competition for up to two hotels.

“I don’t want to just… turn it over to somebody who may have bought somebody’s plans,” he said.

But what came back last month was the resolution calling for exclusive talks with Parmco, which Mr. Bovo amended upon confirming that Parmco’s agreement rights with the county, previously held by Odebrecht, weren’t competitively obtained.

The new directive does not preclude Parmco from participating.

“There’s going to be a decrease in business travel, mark my words, as companies figure out it’s a heck of a lot less expensive to do [business remotely] than send someone to Miami,” Mr. Giménez said. “I don’t know what a hotel should be in a post-Covid-19 world.”

Chairwoman Audrey Edmonson and Vice Chairwoman Rebeca Sosa agreed things have changed, but both noted that the county is only asking for offers.

“We’ve been trying to get something done for years,” Ms. Edmonson said. “If you find that things will change in the future, then we just don’t go through with it.”