Advertisement
The Newspaper for the Future of Miami
Connect with us:
Front Page » Communities » Despite virus challenge, Miami advances Allapattah project 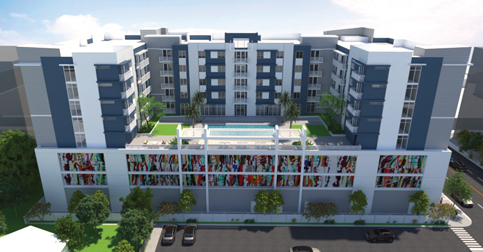 The City of Miami’s planning and zoning department staff has adjusted to Covid-19 and not been prevented in needed reviews for the many development projects in the pipeline.

A good example is the proposed mixed-use residential building planned for Allapattah to be called 2323 Apartments.
The project is moving forward despite the challenges created by the coronavirus, due in large part to the hard work of city staff, said attorney Carlos Lago, speaking for 2323 Pointe Group LLC, in an email to Miami Today.

“The project is currently completing the site plan approval process with the City of Miami. The project was recently reviewed by the city’s Coordinated Review Committee (CRC),” he said.

The project is expected to finalize and conclude the site plan approval process with the city this month.

Although stay-at-home orders and other public restrictions like social distancing have, for now, altered how development projects are evaluated and reviewed, the city’s staff has kept busy.

“The City of Miami has done well adapting to the Covid-19 pandemic,” wrote Mr. Lago.

“Although most city staff has been working remotely, city staff has continued to review projects efficiently and timely. This project was one of the first to be reviewed at a virtual meeting of the city’s Coordinated Review Committee,” he said.

The 2323 Apartments project will be eight stories and include smaller micro unit apartments.

The building will rise at Northwest 23rd Avenue and 36th Street, at 2323 NW 36th St. The city’s Urban Development Review Board recommended approval of the project earlier this year.

Mr. Lago said 2323 Apartments is an urban core infill project fronting a highly traversed street, Northwest 36th Street.
“The project seeks to develop the existing site to provide multifamily housing and ground floor retail, which will activate the pedestrian realm along the commercial corridor,” he said.

The project will have commercial and office uses on the ground floor, and 116 residences.

Parking for up to 129 vehicles will be on the second and third floors.

The dwellings will be evenly distributed from the fourth through eighth levels.

Indoor and outdoor amenities are planned, including a swimming pool above the parking levels.

Of the 116 apartments, the developer says 47 will be micro dwelling units, which are allowed by warrant in certain areas within Transit Oriented Development zones.

In the warrant request paperwork, the developer noted the city’s Miami 21 zoning code requires that micro dwellings be a minimum of 275 square feet.

This project plans 47 micro apartments ranging from 385 to 388 square feet.

As depicted in the site plan, the property is within a Transit Oriented Development area created by the Earlington Heights Metrorail Station.

Architect Ivo Fernandez of Modis Architects told the review board the project is designed to better the community.
He said the site is nestled between Wynwood and Miami International Airport, on a very important corridor: the east-west route linking Wynwood and the airport.

Mr. Fernandez said the parking levels will be screened with printed artwork that allows for ventilation.

The material is to be stretched over the structural aluminum and carries a 10-year warranty, he said, and unlike the standard murals this will last a lot longer and is easily replaced if damaged.