Advertisement
The Newspaper for the Future of Miami
Connect with us:
Front Page » Top Stories » County urges state funding of Miami River Commission 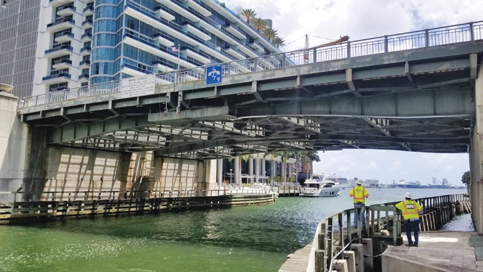 The Miami River Commission, the clearinghouse of the 5½-mile river that winds through the City of Miami to Biscayne Bay, hasn’t received funding from the state in recent years.

Because of that, Miami-Dade County commissioners passed a resolution Tuesday urging the Florida Legislature to appropriate funding for the commission. Eileen Higgins sponsored the resolution.

The county will also transmit the resolution to the governor, senate president, house speaker, and the chair and members of the Miami-Dade County State Legislative Delegation.

Although there was no discussion by commissioners, the legislative text states that funding the commission is “critical to continue the successful revitalization and sustained urban redevelopment of the Miami River and its surroundings.”

In a statement to Miami Today, Miami River Commission Chairman Horacio Stuart Aguirre expressed gratitude to the commissioner for sponsoring the legislation and spoke of the need for the funding.

“The Miami River Commission sincerely appreciates Commissioner Higgins’ sponsoring a resolution, which was thankfully unanimously approved today by the Board of County Commissioners, urging the Florida Legislature to appropriate $150,000 to the Miami River Commission for additional needed service hours from the Scavenger Water Decontamination Vessel, picking up garbage and landscaping along the public Riverwalk, and much more,” it reads.

It goes on to say, “This modest funding significantly improves the natural environment and economy, while the Miami River District provides a massive return on investment with millions of taxes being generated from new businesses and residents along the mixed-use Miami River.”

The City of Miami, the county and the Downtown Development Authority provide 50% of the commission’s funding, the memo reads. Other funding streams include advertisement sales from the commission’s yearly calendar and contributions from the private sector.

But the committee hasn’t received an appropriation from the state in several years.

The commission has funded the clean-up of the Miami River and the nearby areas. That includes funding for the scavenger vessel, which not only removes debris from the river but also decontaminates the water.

Among the most anticipated projects is River Landing, an 8-acre development near the Health District that will feature retail, riverfront dining and office space and more than 500 apartment units.