Advertisement
The Newspaper for the Future of Miami
Connect with us:
Front Page » Business & Finance » Tri-Rail locked out of downtown while Brightline is shut

Tri-Rail locked out of downtown while Brightline is shut

Written by Jesse Scheckner on May 26, 2020
Advertisement 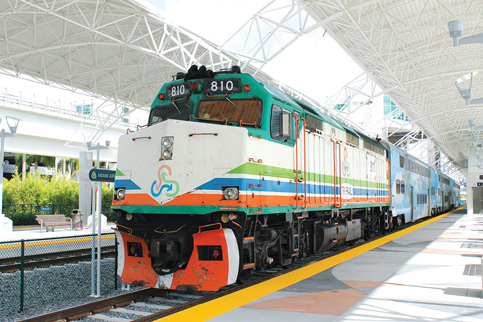 Several steps remain before Tri-Rail can run on Brightline tracks to MiamiCentral Station downtown, which at earliest will happen next year but could take longer due to coronavirus-related complications, Tri-Rail spokesperson Victor Garcia said.

Still not completed, he said, is the certification of both services’ positive train control (PTC) system, a federally mandated safety system that must be installed and operating on all trains and tracks in the nation by December.

Tri-Rail and Brightline use different PTC systems, but they can interoperate with certain adjustments.

But those adjustments can only be made once both train companies are on the same tracks, Mr. Garcia told Miami Today.

“We do have to wait until Brightline is certified, and they have to invite us to be a tenant on their corridor before we can do any required field testing,” he said, adding that Tri-Rail’s own system hasn’t yet been certified. “We’ve installed all the necessary PTC equipment on our locomotive and are finishing up with Amtrak and CSX to make sure we’re certified – haven’t exactly completed it, but we’re on target to have it completed by the end of this year.”

A Tri-Rail link to downtown Miami has remained an unrealized promise since 2015, when Miami-Dade County, the City of Miami and Tri-Rail committed to investing nearly $70 million to fund 26 trains and nine miles of new rail infrastructure to bring service there.

Once established, the 450-person trains would offer a one-seat ride, with almost 20 stops between Miami and Magnolia Park in Palm Beach County, a Tri-Rail map shows. Existing stops in Miami-Dade include Golden Glades, Opa-Locka, two stations in Hialeah and Miami International Airport.

Preliminary computer simulations predict that the added downtown stop would bring some 2,000 daily riders from Fort Lauderdale and West Palm Beach, half of whom would be new users of the system.

Whether those numbers will apply post-pandemic is uncertain. Ridership on Tri-Rail fell from just over 15,000 weekday commuters in early March to just 3,000 in April and early May – an 80% reduction. Mr. Garcia said that led to reductions in service from 50 trains to 18 on weekdays and from 30 trains to 12 on weekends.

“That’s carried us up until now, when we noticed this past week a trickling of people coming back,” he said. “We decided [May 15 to] add one more car on our train process to allow people to keep away from each other, and on June 1 we’re adding four more trains to the schedule for the same reason.”

While Florida Department of Transportation-owned Tri-Rail has continued to run since mid-March, privately owned Brightline – at some point to be renamed Virgin Trains USA to reflect in branding minority investor Virgin Group – has suspended services and laid off hundreds of employees.

Brightline confirmed it laid off 250 of more than 300 South Florida workers March 25, the same day it announced it a temporarily service shutdown in the region.