Advertisement
The Newspaper for the Future of Miami
Connect with us:
Front Page » Real Estate » Olympia Theater program puts preservation ahead of profit

Written by Gabriel Poblete on May 26, 2020
Advertisement 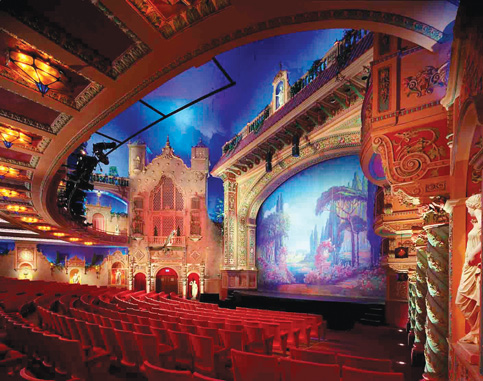 The Olympia Theater’s future has been uncertain for some time now, with several ventures bringing forth plans for the historic building – only to fall to the wayside.

Now a new vision is being put forth by the Flagler District Business Improvement District (BID) and the Downtown Neighbors Alliance (DNA). And while past developers have proposed projects that focus on the lucrative potential for the residential units above the theater, The BID and the DNA are going at it from a preservation standpoint.

The team is looking at a rehabilitation of the downtown staple that would cost about $30 million, according to a letter directed to Miami City Manager Arthur Noriega and provided to Miami Today. It consists of full restoration and maintenance plans for the historic building, as well as an appropriate use for the former office tower. The plan also includes having a non-profit steward of the facility and theater operations in the future.

While a discussion on the theater is on today’s (5/28) city commission meeting agenda, the team is asking it be deferred to the July 9 meeting.

Terrell N. Fritz, the executive director of the BID, stressed that it was not a proposal. He said a process with input from the community.

“I’ve been working in redevelopment for 25 year-plus years. This is hardly the most complicated redevelopment project I’ve worked on or seen,” Mr. Fritz said.

“This is not a proposal. We’re trying to bring forward a vision-driven process for how the city can do it,” he added.

Several funding sources currently in the discussion include $3 million from the city for capital improvement projects and $2 million from the state, of which half a million has already been awarded. Another potential revenue source comes from the transfer of development rights, which is estimated to be as much as $6.7 million. The draft mentions the transfer of density as well, although there is no figure given for that.

All that added up, there remains a deficit of more than $17 million. But Mr. Fritz points to several other potential funding sources, including some that are common for historic preservation initiatives.

The Federal Historic Preservation Tax Incentives Program could result in $5.4 million. Fundraisers could target $5 million from the private sector.

There’s the Miami Forever Bond, of which $78 million is to be allocated to parks and cultural facilities. The city’s Office of Capital Improvements said that the upcoming tranche of bonds could focus on that allocation.

All in all, the draft estimates the potential funding landing in the green with $12 million.

Mr. Fritz says what is important is having a community debate. He argues a request for proposal is not the best path forward for the building, and said recent proposals from developers failed to address the theater’s cultural significance.

“An RFP is great if all you’re after is money,” he said.

The DNA and the BID have had discussions with the administration and elected officials, including meetings with Mayor Francis Suarez, former Deputy Manager Joe Napoli and Mr. Noriega, back when he was still the CEO of the Miami Parking Authority.

While there is a discussion of the theater on today’s (5/28) commission agenda, it is to be deferred.

Back in September, Miami Dade College pulled out of negotiations with the city for the management of the theater.

“After careful consideration and due diligence, Miami Dade College has decided not to pursue the Olympia Theater endeavor with the City of Miami,” the college had said in a press release. “The financial figures did not work for the college for the management of the theater and apartments. We thank the city staff for its professionalism and time on this matter.”

The college’s withdrawal was one of several close calls for the theater. Last year, the city commission turned down an unsolicited proposal from New Urban International for a public-private partnership that included plans to convert the residential units above the theater into a boutique hotel and renovate the theater, among other things.

In 2017, Related Urban Development Group LLC submitted an unsolicited proposal to form a public-private partnership to redevelop residential units above the theater as well as making capital improvements to the theater. However, they then walked it back.

The Olympia Theater opened in 1926. It was designed by Architect John Eberson and boasts a Venetian interior design. The building served as a movie palace and showcased Vaudeville acts, and has featured world-class performers including Luciano Pavarotti, Etta James and B.B. King.

The Olympia Theater and Office Building was placed on the National Register of Historic Places in 1984.

The theater is managed by the Olympia Center Inc., which oversees the building’s 73 units as well.

In 1976, South Florida philanthropist Maurice Gusman saved the theater from demolition. He then deeded the theater to the City of Miami under a covenant it be managed by the Miami Parking Authority. Therein lies the current lawsuit.

The Maurice Gusman Cultural Center for the Performing Arts Inc., a dissolved Florida not-for-profit corporation, sued the city, claiming a breach in agreement when the Department of Off-Street Parking of the City of Miami, better known as the Miami Parking Authority, in 2011 forfeited its oversight and management of the property. The case remains in litigation.

One Response to Olympia Theater program puts preservation ahead of profit