Advertisement
The Newspaper for the Future of Miami
Connect with us:
Front Page » Government » Miami-Dade resumes film permits with heavy demand

Written by Abraham Galvan on May 26, 2020
Advertisement 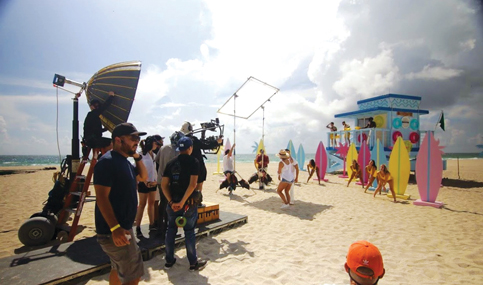 The Miami-Dade County Office of Film & Entertainment is starting to again issue film permits, but on a limited case-by-case basis.

Strictly following the county’s guidelines and regulations to start transitioning to the “New Normal” and early phase of reopening, the approval process of obtaining a permit for location filming may take longer than usual, with possible shooting dates for mid-June.

Depending on how much space is needed and if staff can be provided for sanitation and supervision, production crews will be allowed to shoot at government buildings like the libraries, outside of culture centers, parking garages, and road and bridges , said Sandy Lighterman, Miami-Dade’s Film & Entertainment commissioner.

Beaches, parks, Florida courts and correctional facility filming or photo permits are currently not being issued, she said.

“There have been a lot of healthy discussions involving local, national and international level organizations in regards of coming back. Unions, production companies and studios are coming up with even stricter guidelines for everyone’s safety with the help from CDC medical officials,” Ms. Lighterman said.

The county’s film & entertainment office issues permits for 13 municipalities throughout Miami-Dade that are adhering to all “New Normal” guidelines, with some having even stricter regulations going beyond the county’s safety rules.

“The film industry touches so many aspects of businesses, like hair and makeup artists, talent, directors and production crews. That is why we want to do it the right way and take care of our film industry, making sure everyone goes home safely,” Ms. Lighterman said.

Filming in Miami-Dade long has fueled a large slice of the economy, as it has throughout the state. Florida’s Department of Economic Opportunity found that over seven years ending June 30, 2017, some 300 film productions that got state tax credits spent $1.26 billion in the state, paid $751 million wages and created 117,417 Florida jobs.

During the pandemic, multiple emails have been coming in daily inquiring when Miami-Dade is going to completely open for production, Ms. Lighterman said. “Multiple directors and producers are willing to change creative to follow the needs of how shooting will be like now, whether the new formula is temporary or permanently.”

For example, a production that wants to shoot at the beach will be quite different in how social distancing is going to be implemented rather than inside a restaurant having up to 50% of capacity restrictions. “You’ll have completely different or multiple guidelines in every scenario,” Ms. Lighterman said.

Some new ways content is going to be made include having shorter days and fewer crew members on set, she said, “There is going to be a lot of pre-production planning ahead of time, which is key. Once on set there will not be much to worry about.”

“The film & entertainment industry is an economic development and we want to put crews back to work, but in a safe manner,” Ms. Lighterman said. “It’s definitely a puzzle, but I’m sure we will figure it out.”