Advertisement
The Newspaper for the Future of Miami
Connect with us:
Front Page » Transportation » Lockdown let state accelerate massive I-395 project

Written by John Charles Robbins on May 26, 2020
Advertisement 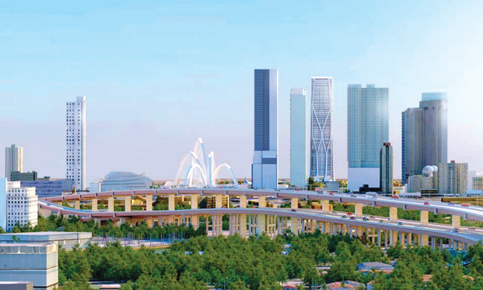 The dramatic drop in traffic on Miami’s streets and freeways resulting from the health crisis has allowed the state transportation department to accelerate the progress on the I-395/SR 836/I-95 Design-Build Project.

Two months ago, on a directive of the governor, the Florida Department of Transportation (FDOT) announced the speeding up of several critical infrastructure projects, including the I-395 project and its Signature Bridge in the heart of downtown.

The goal was to advance the project by one month and this week the FDOT reports that goal has been achieved.

“The expanded lane closure hours have allowed the contractor to increase production and expedite the concrete replacement phase of the project by approximately four weeks,” said Oscar Gonzalez III, senior community outreach specialist, in an email to Miami Today on Tuesday.

The work includes the “Signature Bridge” over Northeast Second Avenue and Biscayne Boulevard, an upper deck of traffic built over SR 836 and the Miami River, and the addition of one lane to the northbound entrance to I-95.

“The contractor does not anticipate additional multi-lane continuous closures at this time but will continue to implement extended lane closure hours. Lane closures will be adjusted as needed based on actual traffic volumes,” wrote Mr. Gonzalez.

Under normal traffic conditions, the contractor removes the existing concrete slabs, prepares the roadway base for the new concrete, places the new concrete, performs joint cuts and allows the concrete to cure between 9 p.m. and 5:30 a.m., he explained.

“Approximately 340 ACPs have been installed to date. Bridge support columns are also being constructed, with a total of nine completed and many others in different phases of completion. The contractor is also working on removing existing sections of I-395 to open up additional areas for foundation work,” Mr. Gonzalez said.